One can't get away from Carmen. The happy combination of unforgettable tunes, the exotic ambience, and a psychologically plausible plot (by no means a sine qua non in the genre) have ensured that Georges Bizet's masterpiece is among the top three most performed operas worldwide nowadays. Even by these standards, however, Sydney's recent Carmen fixation is noteworthy. In the last four years, there have been no fewer than three separate stagings by Opera Australia: Gale Edwards's flashy harbour-side production in 2013, the return of Francesca Zambello's version in the Opera House in 2014 , and now John Bell's brand new take on the story. With Edwards's staging returning in 2017, the national company seems no more able to avoid Carmen than Don José can resist Carmen herself.

But is this a problem? Is a Micaëla-like intervention needed (and is it as unlikely to succeed as it did in the opera)? For Don José and Carmen, passion leads to mutual destruction; however, OA's obsession with the seductive French opera is unlikely to be fatal to either party. Carmen is simply too potent to be harmed by over-exposure: the music is of a quality that can withstand multiple hearings. On the other hand, OA's focus on a narrow repertory of works has aroused criticism before now. This is not the place to rehash the old war of words between the idealistic cognoscenti, who want more variety, and the pragmatic management (although to do Artistic Director Lyndon Terracini justice, the current season marks a welcome expansion of coverage). In any case, there is an argument beyond the financial for continuing to stage bankable favourites with some regularity: they are, by definition, superlative introductions to the genre of opera. The Sydney Opera House audience comprises not only seasoned opera-goers but also an unusually high proportion of casual visitors, eager to experience what goes on inside the iconic building. Carmen remains perhaps the single best entry-point for the operatic tyro: it is at least as melodious as Traviata, as passionate as Bohème, and as humanly interesting as Figaro.

Summed up in a word, John Bell's new production is colourful. Together with set designer Michael Scott-Mitchell, costume designer Teresa Negroponte and lighting designer Trent Suidgeest, Bell has created a prismatic experience for the viewer. Even in the first part of the Prelude, which was played before the curtain was lifted, the fabric was lit in such a way as to emphasise its redness, the colour in which both Carmen and the Toreador were initially clad. By contrast, the chorus members were dressed in every possible shade. This visual noisiness complemented the faded colours of the single set used throughout the production – three sides of a square, with steps in the foreground. The buildings were sun-bleached into pastel shades, with mouldings on cornices and dilapidated shutters suggesting former smartness. A fast-food van was driven on to represent Lilas Pastia's tavern in Act II, and lorries backed into place as smuggler's vehicle and toreador's carriage in Acts III and IV respectively. This procession in the last act perhaps overdid the luminous colours, although the fake horses were a nice comic touch. 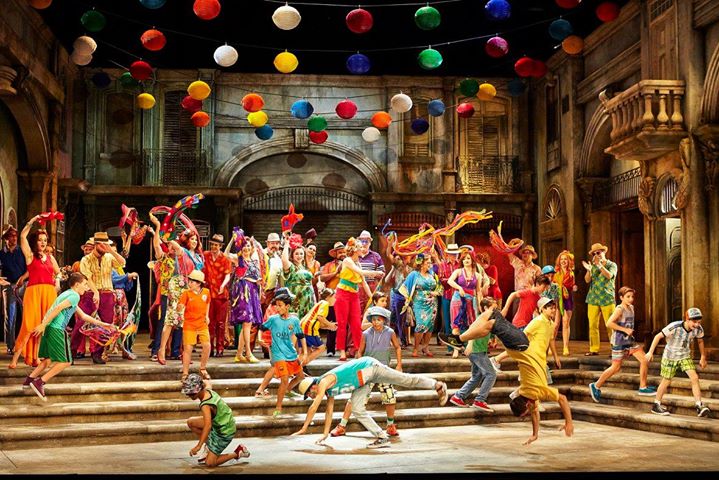 As the presence of the vehicles suggests, this production did not take place in the 1820s as Bizet and his librettists envisaged. It thus follows in the wake of Bell's take on Tosca for OA, which involved updating the action from the Napoleonic era to Fascist Italy. This time he reimagined not just the time but also the location. Wisely, he retained the Hispanic setting which is so endemic to the music and plot of Carmen; however, we have moved transatlantically to present-day Havana, according to the director's note. The first obvious cue to think of Latin America came as the curtain rose on the foreboding coda to the Prelude, when dancers mimed the passion of the music through various Latin dance moves. The costumes also suggested a similar location: the boys' chorus (unfortunately cut in Edwards's production) wore singlets or football jerseys, the guards varied shades of combat gear, the civilian men had fedoras, check trousers and braces, while the women wore scarves and skirts.

The strongest parts of this production for me were the crowd scenes, where the stage choreography was lively and at times genuinely exciting. Act II, which had both the gypsy song and the Toreador number, was a particular high point. As per usual, seeded among the singers were specialist dancers, but this time there were somersaulting minors in the boys' chorus too. The singing (of both adult and children's choruses) was wonderful, with diction and ensemble not suffering, no matter how busy the on-stage business.

My hopes were particularly high for Yonghoon Lee, who had been spectacular as Calaf in Turandot for OA back in 2015. While he was never less than highly competent here, the role of Don José seemed to suit him less well. He provided full-voiced high notes when they were needed, and he could also pull back to a gentle floated tone, for instance at the end of the Act I duet with Micaëla, but the gradations in between were less satisfactory. His best moments as an actor were in the final Act, in which he appeared before Carmen as an entirely broken man, bare-footed and dirty, and barely dangerous in spite of his desperation.

This final encounter was by some way the most interesting scene the two protagonists shared. Clémentine Margaine had played the Spanish seductress in a fairly straightforward fashion to that point, but herreaction to her former lover's pleas was to turn her head away, as if genuinely moved by his abjection. This cast the events leading up to her death in a different light. Whereas in other productions her defiance is a kind of heroic assertion of female autonomy in the face of male threats, here one had the sense that she could easily have evaded the shambling José had she wanted to. So why did she die? My sense was that by deliberately provoking him to stab her, she assuaged some guilt she felt on seeing José so beaten and destroyed. This reading admittedly runs the risk of reinscribing Carmen's actions within a patriarchal framework of sin and expiation, but after umpteen celebrations of the liberated protagonist, perhaps exploring other (older?) paradigms is timely.

Both Natalie Aroyan (Micaëla) and Michael Honeyman (Escamillo) were among the many survivors from the 2014 production of the opera. Aroyan played her character as more worldly-wise than naïve, and was particularly good in her Act III solo. Last time, Honeyman entered on horseback; this time, he was on foot, but still delivered a charismatic rendition of the Toreador Song. There was strong support from the minor roles. The ensembles involving Jane Ede (Frasquita), Margaret Trubiano (Mercédès), Luke Gabbedy (Dancairo), and Kanen Breen (Remendado) were a joy to hear for tightness of ensemble and vocal agility, with Ede's few solo moments particularly pleasurable. Adrian Tamburini was a solid Zuniga. The orchestra under Andrea Molino were the unsung heroes of the night, from the sparkling Prelude to the final despairing echo of José's last cry. Molino showed himself to be sensitive to the singers all night, matching their dynamics and tempo inflections well. The Entr'acte before Act III, a short idyll representing the brief off-stage happiness of the lovers, was deservedly applauded.

Carmen may have died as usual, but Carmen more than survived this latest rendition. It was lively and likable, even if the chemistry between the principals wasn't the strongest. While other productions may have involved me more in the lives and loves of these characters, this time I was fascinated by how it all ended. To paraphrase the last words of a very different operatic heroine, you can forget them, but ah! remember their fate.