It was one of the most notorious episodes in the annals of Australian publishing. In September 1993, writing in Quadrant, Peter Ryan, the former director of Melbourne University Press (1962–87), publicly disowned Manning Clark’s six-volume A History of Australia. Clark had been dead for barely sixteen months. For scandalous copy and gossip-laden controversy, there was nothing to equal it, particularly when Ryan’s bombshell was dropped into a culture that was already polarised after more than a decade of the History Wars.

One month before Ryan’s blistering attack, Quadrant, edited by Robert Manne, ran Geoffrey Blainey’s essay ‘Drawing up a Balance Sheet of our History’, in which the wily historian identified his former teacher Manning Clark as one of the chief architects of what Blainey labelled the ‘Black Armband’ view of Australian history. Now, in his essay and others that followed, Ryan chimed in with more vindictive intent, describing Clark’s work as ‘gooey, subjective pap ... a vast cauldron of very thin verbal soup’. He mocked Clark’s literary style as ‘bad to the point of embarrassment’, and cast his entire multi-volume history as little more than ‘a construct spun from fairy floss ... a fraud’. And this from a publisher who, when Clark was alive, had lavished him with nothing but fawning, unadulterated praise. Ryan had inherited Clark’s project, then shepherded and cajoled him to complete each successive volume, from Volume Two in 1968 through to the publication of Volume Six in 1987.

Mark McKenna is an Australian Research Council Research Fellow in History at the University of Sydney. His most recent book is Return to Uluru, published by Black Inc. McKenna's work An Eye for Eternity: The Life of Manning Clark (Miegunyah Press, 2011) won the 2012 Prime Minister’s Prize for Non-Fiction. 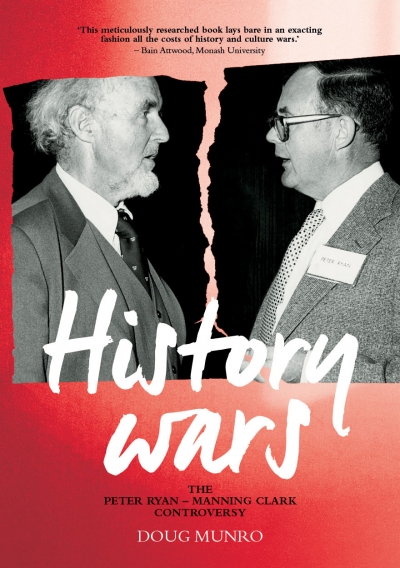