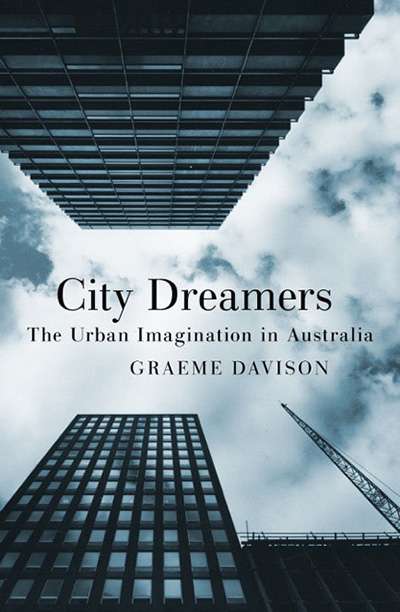 In The Oxford Companion to Australian History, of which he was a co-editor with John Hirst and Stuart Macintyre, Graeme Davison begins his essay on Geoffrey Blainey by saluting him as ‘the most prolific, wide-ranging, inventive, and – in the 1980s and 1990s – most controversial of Australia’s living historians’. In volume one of the Encyclopaedia of Historians and Historical Writing, Geoffrey Bolton notes that Blainey produced Australian history ‘in which explanation was organized around the exploration of the impact of the single factor (distance, mining, pre-settlement Aboriginal society ...)’.

This is an intriguing, if admittedly artificially contrived, juxtaposition: Davison himself has been ‘prolific, wide-ranging and inventive’ and, in City Dreamers, it is fair to say that ‘the single factor’ is a dominant – though never constraining – feature of the book’s structure. ‘Factor’ is too dead a term, however, to characterise Davison’s exploitation of signature events and people to flesh out each stage of his anatomy of cities, city lives, and their dreaming. Far from conducting a sort of on-the-page PowerPoint event – that deadliest of digital age procedures in the wrong hands – his singularities cryptically signal creativity (‘Artists’, ‘Poets’), whimsy (‘Slummers’), satire (‘Snobs’), confrontations (‘Anti-Suburbans’), existential gloom (‘Pessimists’), social investigators (‘Scientists’), existential restlessness (‘Exodists’), and so on. This is a highly organised discussion which wears its careful construction lightly while keeping faith with it.