Hold Your Fire by Chloe Wilson

A series of beautifully controlled fictional voices and an exquisite sense of literary craft contribute to the dark magnificence of Chloe Wilson’s début collection of short stories, Hold Your Fire. This volume explores the strange and sometimes surprising abject horror that characterises the quotidian and the ordinary. The stories both examine and revel in the classically Kristevan abject realities of the body’s expulsions and the disgust that is often characteristic of social marginality. For example, the ‘poo phantom’ writes a ‘message in shit on the walls’; tampons wrapped in toilet paper are described as ‘bodies that needed to be shrouded for burial’; a character feels a ‘quiver down to the bowels, the rush that is equal parts excitement and dread’; another tries ‘to pass a kidney stone’; and two sisters try an ‘Expulsion Cure’, where the doctor asks how much they expel: ‘And how often? And what is the colour? The texture? … When you eat something – poppy seeds, say, or the skin on a plum – how long does it take to reappear?’

The book also encompasses a sense that to live well is to move beyond the monotony of much twenty-first century urban existence. For example, the extraordinary piece of flash fiction that opens the book, ‘The Leopard Next Door’, has a style reminiscent of James Tate or Russell Edson and follows the narrator’s neighbour who buys a ‘juvenile leopard’ before seemingly disappearing. Similarly, in ‘Arm’s Length’, when the narrator is told to, ‘Keep that boy at arm’s length ... she took a saw and severed her arm at the shoulder.’ One of the most engaging characteristics of the collection is the feisty, sometimes ferocious sense of humour. The points of view of these works tend to critique and ironise what they present while simultaneously maintaining a strangely beguiling affection for their subject matter. This is evident from the witty opening hook of each story, including: ‘the first part of Maya to wash up on shore was a foot’; ‘It always seemed tragic to me that Ian was so much shorter than his daughters’ and the magnificent line: ‘While waiting for his faecal transplant, my husband wasn’t as fun as he used to be.’

Wilson is known to many readers as an award-winning poet. Here, she brings her well-honed understanding of poetic metaphor and dramatic monologue to bear on her prose writing. The title story was originally published in Granta, and touches on, or introduces, many of the preoccupations and themes in the collection. In this narrative, while the protagonist ‘designs weapons that could cause massive, instant carnage’, her boss tells her never to be ashamed. He expresses a haunting conviction: ‘Everyone holds their fire. It might come down to the last minute, the last second even. But no-one really wants to press the button.’ The narrator contemplates this observation as she attends meetings at her son’s school and gives her husband a ‘DIY faecal transplant’.

These stories present many windows onto the grotesque with an emphasis on olfactory disgust. This is most evident when a character in ‘The One You’ve Been Waiting For’ vomits in minute and technicolour detail, and when the narrator ‘takes a deep breath right in the place where the smell was the worst. A private thing, like a prayer or a confession.’ The reader is often confronted by elements of repulsiveness in the stories, only to find their unsettling nature is powerfully connected to the bodily connections everyone has with the world. In this sense, we may understand Wilson’s grotesquerie to be a way of examining and critiquing the commonplace, while simultaneously revealing it to be connected to ways of thinking and apprehending the realities we know. In being so grounded in the everyday, the abject realities presented in these stories ask the reader to explore whether there is a certain abiding toxicity and surrealism in the daily lives and rituals that people use to shore up their existences. In this light, Hold Your Fire may be seen as a sustained series of nimble explorations in re-presenting and critiquing many twenty-first-century assumptions. Wilson casts reality into sometimes whimsical, sometimes parodic new light, while probing at the underbelly of the daily rounds, conversations, and self-projections that characterise accepted social norms. She questions what people strive to be; how this may be judged and delves into the basis of the assumptions by which many people live. Many of Wilson’s characters are transgressive and eccentric, prioritising ambiguity and liminality. They often choose to embrace their instincts and urges, liberating them from the constrictions of societal order and creating a sense of exhilarating uncanniness.

Wilson’s characters are often unreliable and unlikeable, but it is a testament to her writerly skill that all are nevertheless somehow appealing and compelling. The reader finds herself wanting these characters to succeed in their ambitions, however weird or perverse. There is a sense that even the strangest of Wilson’s fictional people are not so unlike the people we all know, even in confronting moments when, for example, the narrator in ‘Powerful Owl’ wheels a baby onto the road and leaves it there for a minute before announcing, ‘Please understand that everyone left alone with a small child has wondered what they might get away with.’

Chloe Wilson’s Hold Your Fire combines dazzling storytelling with impeccable prose. In this remarkable collection, Wilson reveals herself to be a postmodern fabulist, fascinated by the weirdness one may encounter day to day and by the extraordinariness of apparently ordinary situations. With razor-sharp wit, she demonstrates that ‘People do all sorts of strange things’.

Cassandra Atherton is a poet and scholar. She is Professor of Writing and Literature at Deakin University. She was a Harvard Visiting Fellow in English and a Visiting Scholar in Comparative Culture at Sophia University, Tokyo. She is writing a book of prose poetry on the atomic bomb with funding from an Australia Council grant. 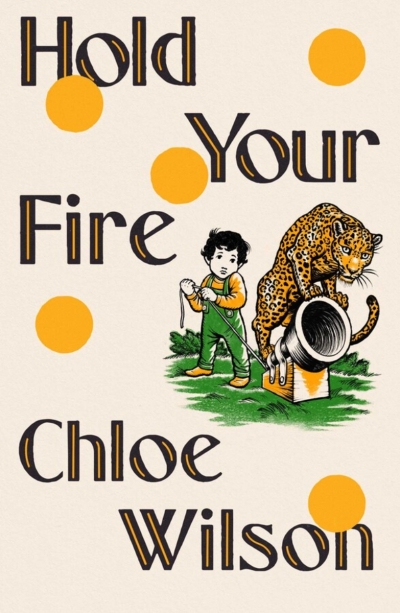