‘Endings & Spacings’ opens with a confession: after several decades of ‘making connections / through strings of words’, Pam Brown is no closer to answering the question, ‘what does a poet / do’? In interviews, Brown tends to describe writing poetry as a kind of ‘benign compulsion’, an engagement with the world that must be critical to be interesting but that ‘can’t answer questions any better than anything else’, as she asserted in Meanjin in 2001 and has resolutely maintained ever since. In her latest collection, Endings & Spacings, even this benign compulsion – ‘dwindling now’ – comes under threat, its benignity troubled by the resemblance between arranging lines on the page and the curation of fragments in a virtual ‘museum / of imperial plunder’.

Brown’s preoccupation with the historical detritus of human existence – in memories, photographs, Christmas decorations, and rotting bouquets – comes to a head here, as does her ambivalence towards the task of cataloguing and arranging (‘not composing’) such material for an audience caught in the same ‘networks / of self confirmation’ as herself. If we understand detritus in Brown’s work through Mckenzie Wark’s Capital Is Dead (2019) – the framework of which looms large in both Brown’s and Disney’s collections – we could say that Brown’s world is thickly layered with what Wark refers to as the ‘practico-inert’, material evidence of the past which testifies to the difficulty of putting human ideals into practice. Its population is thus rendered passive and indifferent by the seemingly insurmountable challenges posed by the overheated junkyard of the present. Brown is not so much sanguine about this state of paralysing inertia as she is sceptical about the alternative – or at least suspicious about giving settler Australian poetry a more affirmative role in the making of history.

This might explain the tension between connectivity and isolation that runs through this collection, particularly in the alignment of text on the page. The question is not so much how to connect during the apocalypse – these poems are full of connections, between ‘strings of words’, images, memories, even between poets themselves, primarily over Zoom – but rather, whether there’s any point in meeting up with one other person for an hour of socially distanced exercise when you ‘don’t want / to   w a l k / any where any more’. This sentiment predominates in ‘(crossing my mind)’, the first of the three loosely divided poems comprising the collection, and is developed further in the second poem, ‘(lingering)’, as in the description of a ‘pocket park’, a ‘favourite / outdoor wedding / location’. The spacing of text on the page is initially playful, responsive to the topography of the scene, before flattening abruptly into a subdued list – ‘silver bits / white tat / ashy peach / organza / chintz flakes’ – and finally abandoning the task of cataloguing altogether – ‘rubbish / left behind’.

The compulsion that underwrites ‘Endings & Spacings’ may be dwindling, but it is still the compulsion of one of Australia’s best contemporary poets. It is no surprise, then, that the result is clear-headed, specific, and never predictable on the level of the word, the line, the caesura, the page. These poems are peppered with quick, luminous moments even as they meditate on passivity, blurring the line between acceleration and inertia – walking to a ‘field of weeds’ is ‘like / nimbling / an interior Besozzo’, purple king beans scream ‘all the way / from pot to pan’, ‘clumsy bats / echo-lob across an ordinary horizon’ and the supermoon might be ‘waning / but it’s bright’. Brown doesn’t reconcile this tension in the final lines of the collection:

we’ll have to
make up for it

In avoiding a clear conclusion, this ‘denouemental’ closing statement invites and rewards rereading, maybe even lingering.

Disney addresses similar anxieties about documentation and history with his image of an army of Benjaminian angels, ‘backs / turned on the present’, ‘shooting || / selfies for future museums’. Like Brown, and Wark, Disney is concerned with the accumulation of the practico-inert, looming ominously in the background as the angels shoot their selfies: ‘our histories / storming in / -dustrial, propulsive, a piling / reserve of debris’.

However, the very notion of ‘inertia’ for Disney must also be understood as fundamentally destabilised by the growth imperative of contemporary capitalism, so that it no longer describes the tendency of matter to maintain its state of (im)mobility but rather the maintenance of an ever-increasing rate of acceleration. This state of frenetic standstill is evoked in ‘Conversations in taxis’, the spinning ‘cab an unstill point’ as the driver reminds his passengers that ‘accelerations & inertia’ are ‘one & the same’. While this certainly resonates with Brown’s ‘unending bad news’ (can ‘worse / get any worse’?) the difference is that Disney approaches this so-called ‘age of screen-blinded, willfully ignorant, atomized Homo digitalis’ with an optimistic belief in poetry’s capacity to ‘unroll our fists into outstretched hands that can beckon, wave, reach out’ (Kenyon Review, 2019).

Is Disney’s solution, then, for the angels to put down their phones, look around themselves, and maybe write a poem about bees? Perhaps. But for a poem about bees to be useful at this point in history – in which Australian farmers are importing Israeli robot bees to cut costs on pollinating their tomatoes – it can’t be written in the same language that poets have been using to write about bees for hundreds of years. accelerations & inertias marks the next chapter in Disney’s ongoing search for an updated poetic language, something with the capacity to ‘deprogram our biorhythms of indifference’. This is most obvious in his use of homophonic and machine translation in his engagement with Korean poetic traditions, and the use of the coding symbols ‘>>>’ and ‘||’ in the title and body of his collection. The myriad ways that Disney engages with digital languages suggest a concurrence with the speaker in ‘Coronation’, who characterises the late capitalist apocalypse as simply ‘one more / operating system’. Yet rather than wondering ‘how to contact Admin. / Troubleshooting, those || who wrote the code’, Disney proposes something closer to a collective Warkian hacking. The parallel lines of the ||, or caesura – a scission that is also a pause, a space, between units of rhythm and speech – gesture towards a mode of coming together that is neither an act of fusion nor an acceptance of the limits of one’s material conditions. Rather, it symbolises the inertia of materiality itself in developing a new kind of resistance.

The extent to which Disney’s work is informed by this possible resistance – his commitment to poetry as a means of ‘strid[ing] together into a dialectic of intelligent, courageous, unflappable hope’ (2019) – is at once thoughtful, compelling, and a little annoying. The structural constraints adopted throughout are helpful to the extent that they highlight the improvisational fluidity of balancing broken syntax, which is Disney’s strong point. If he occasionally veers towards the intentionally mawkish, even a little smug, this is mercifully offset by moments of self-awareness and playful humour (‘thinking, thinking || fuckoffificatorily’).

The most effective moments in accelerations & inertias are understated, and involve people showing each other things. In my favourite poem, ‘Bukhansan Dreaming’, two people are together in a forest, one explaining repeatedly: ‘this one / my favourite tree’, ‘these are / the best stones’. This act of sharing, in its intimate simplicity, recalls Disney’s epigraph: ‘things explain each other, / Not themselves’. It also resonates with one of the more poignant passages in ‘Endings & Spacings’, in which the speaker observes the night sky with her partner, J. The beauty in this scene is not in the stars or the waning moon; the description of the sky itself is underwhelming, slipping almost immediately into a meditation on Eureka nationalism and suburban driveways. Rather, it’s in the showing, the presentation, and in the presentation of the presentation that there’s something stubbornly moving: 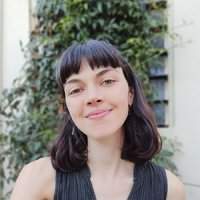 Abigail Fisher is a first-year PhD candidate at the University of Melbourne and an occasional bookseller. 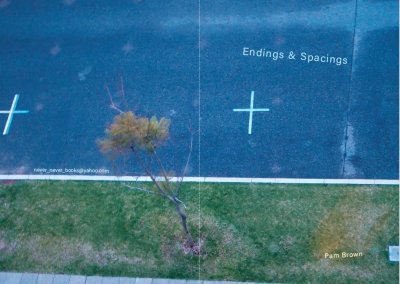