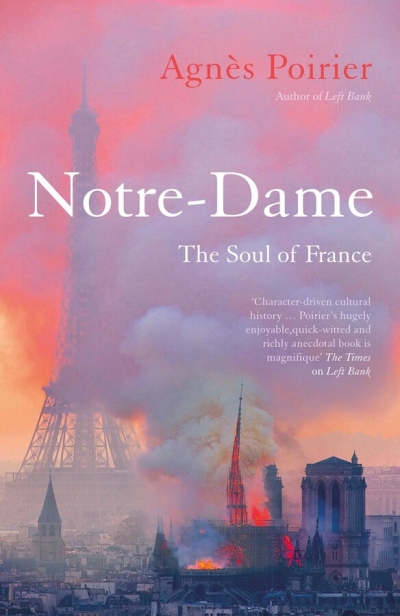 French journalist Agnès Poirier has a flair for relating the saving of France’s artistic treasures. One of the most gripping chapters of her previous book, Left Bank: Art, passion and the rebirth of Paris, 1940–50 (2018), told the story of Jacques Jaujard, who skilfully evacuated the Louvre’s greatest works mere days before the outbreak of World War II. In Poirier’s brief volume on Paris’s cathedral of Notre-Dame, devastated by fire on 15 April 2019, it is the turn of curator Marie-Hélène Didier and Notre-Dame’s operational director, Laurent Prades. As Poirier tracks the fire from outbreak to containment, we watch them battle Paris’s traffic-locked streets by car, RER, Vélib’, and foot to reach the cathedral and rescue what they can. Prades’s sudden (and entirely understandable) inability to remember the code for the safe in which the Crown of Thorns is kept makes for tense reading.

However you might feel about religious relics, the media attention and the donations that poured in after the fire suggested that, for many, Notre-Dame is part of a shared global heritage. For Poirier, ‘The tragedy revealed that a staunchly secular country had its roots firmly grounded in history, a history that was Christian.’ Some found this a shock, she argues, as ‘Notre-Dame, a place where the sacred met the secular, reminded us all of where we came from in an unexpected and powerful way.’