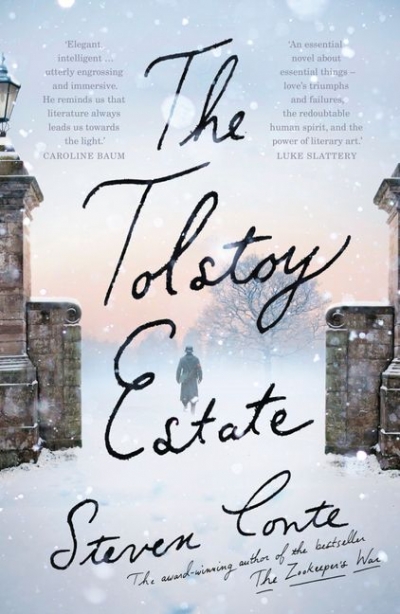 During Operation Barbarossa in 1941, the Germans occupied Yasnaya Polyana – the former estate of Leo Tolstoy – for just forty-five days and converted it into a field hospital. The episode features in the war reportage of Ève Curie (daughter of Marie), and sounds like tantalising, if challenging, source material for a novelist. There’s the brutal irony inherent in the home of a world-famous prophet of non-violence being occupied by, of all people, the Nazis. There’s the human loss and horror of the deadliest military operation in the deadliest war in history. And there’s audacity in invoking and responding to Tolstoy’s great epic of another – Napoleon’s – doomed invasion of Russia: War and Peace (1869).

With his second novel, The Tolstoy Estate, Steven Conte has ignored those challenges altogether and tried to write a bestseller. It’s an odd choice, given the literary invocation of the premise, and one that is likely to appal Tolstoy enthusiasts.

In fact, it is better not to approach the work with the great writer in mind at all. Although Conte describes it as the ‘love child’ of War and Peace and Curie’s accounts, the result is a middlebrow romp which includes a love affair between a Nazi doctor and a Bolshevik writer, their reflections on Tolstoy, and a lot of usually crass ribaldry on the side. (Nazi characters walk around saying things like: ‘Good God, man, what’s the point of being the master race if we can’t ogle a lady subhuman?’)