Sofie Laguna does not shy away from confronting subject matter. Her first adult novel, One Foot Wrong (2009), is about a young girl forced by her troubled parents into a reclusive existence. Her second, The Eye of the Sheep (2014), which won the Miles Franklin Literary Award in 2015, tells the story of a young boy on the autism spectrum born into a family riven by poverty and violence. Her third, The Choke (2017), concerns a motherless child in danger because of her father’s criminal connections. Infinite Splendours is also about the betrayal of a child by the adults in his life, but here Laguna ventures into new territory, exploring the lasting impact of trauma on a child as he becomes a man, and whether the abused may become the abuser.

Infinite Splendours, set in a small town near the Southern Grampians in Victoria, concerns a ten-year-old boy called Lawrence Loman who lives with his mother, Louise, and his younger brother Paul. The boys’ father, Charlie, an air force pilot, was killed during the war, when Louise was pregnant with Paul. All that the boys know of their father is his ghostly presence in the spare room, where a photo of him sits next to his posthumous Atlantic Star Medal. ‘It was as if father was a medal,’ thinks Lawrence. 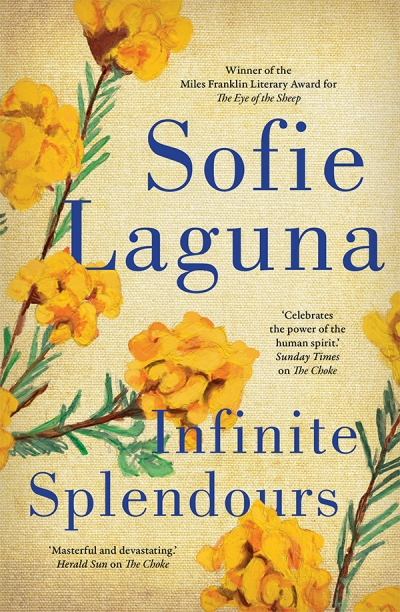