The Sentence by Louise Erdrich

Edith Wharton, famed purveyor of ghost stories, said that she needed her reader to meet her halfway among the primeval shadows; that to believe in the fetches, haunts, and other ‘spectral strap-hangers’ that filled her pages one must still be able to hear the distant echo of the hoarse music of the northern Urwald or the churning darks seas of the outermost shores. The spectral presence in Louise Edrich’s new novel, The Sentence, appears in the midst of a decidedly unghostly suburban Minneapolis, but so compelling a presence is the phantasm of Flora that the reader embraces her wholeheartedly, diving without question into those primeval shadows where wraiths lurk.

It is the singular Tookie, an Ojibwe woman who has found redemption from a lifetime of strife and sorrow working at a bookshop specialising in Native American literature, that Flora has chosen to haunt. Having spent ten years in prison, Tookie marvels at her miraculous new life, which contains ‘a regular little house’, a job, and a kind husband. ‘Knowing what I know of my tribe’s history, remembering what I can bear to remember of my own,’ Tookie says, ‘I can only call the life I live now a life of heaven.’ The novel is both the unfolding tale of Flora’s haunting of the mordant, whip-smart Tookie, and a limning of other kinds of spectres from Native American history that rise up and threaten to overwhelm the precariously balanced present.

In his provocative 2006 book Native American Fiction: A user’s manual, the Ojibwe novelist and academic David Treuer bemoans what he terms ‘the legendary mist of Indian misery’ that, to his mind, suffuses the work of many of his contemporaries. ‘How does one escape this all-pervading thing, exoticized foreknowledge?’ he asks, claiming that much of Native American writing is read for its cultural authenticity rather than as literature. Erdrich, too, has been preoccupied with these kind of questions of white appropriation, condescending sympathy, and sentimental racism – in life and in literature. The Sentence takes up this fraught issue in a far more overt manner than Erdrich’s previous work. In the bookstore, Tookie encounters earnest white customers she terms ‘wannabes’, who confide to her that they always wanted to be Indians as children, telling her tales of sleeping in tipis made of blankets, playing at fighting cowboys, and tying their sisters to trees. ‘The person is proud of having identified with an underdog and wants some affirmation from an actual Indigenous person,’ says Tookie. She is also assailed with questions ranging from ‘Can you appraise my turquoise necklace?’ to ‘What’s a cultural Indian thing that would fit into our funeral service?’ Tookie tries to sell these sorts of customers Paul Chaat Smith’s Everything You Know About Indians Is Wrong, but notes wryly that they hardly ever buy it.

Before her death, Flora’s obsession with all things Native American has turned into an ‘unaccountable, persistent, self-obliterating delusion’. At first, she tells people that she had been an Indian in a former life, then later invents a Native American ancestor, producing a photograph of a ‘grim woman in a shawl’ that Tookie suspects she has plucked from a junk store bin. She attends every powwow and has made herself a traditional dance outfit of buckskin and purple beadwork. But Flora’s ‘Nativephilia’ has a positive side to it, too; she fosters Native American teen runaways, attends protests, raises money for a Native American women’s refuge, and is generally devoted to good works in the community. ‘So what if she needed, however fake, a connection?’ asks Tookie. Slightly unnerving and acquisitive in life, Flora’s obsession becomes openly sinister in her spectral form; she wants to take possession of Tookie.

For a ghost story, The Sentence is also intensely preoccupied with worldly concerns and veers frequently into social realism, vividly chronicling a fractured and uneasy nation. The novel is set mostly in 2020, during the pandemic, and also encompasses the killing of George Floyd and the ensuing outrage. Erdrich brilliantly expresses feelings about the recent calamity that often remain inchoate for the rest of us in prose that is never solipsistic or sentimental. Tookie reflects on the way that ‘we straggled through a year that sometimes seemed like the beginning of the end. A slow tornado. I want to forget this year, but I’m also afraid I won’t remember this year.’ In the aftermath of the George Floyd protests, Tookie describes the way that the smell of popcorn is a blessed reprieve from the smell of spent tear gas – ‘sour, musky, chalk’.

Erdrich’s rendering of the catastrophic events of recent times is perfectly counterposed with her unfolding of the central ghost story, and the tapestry of intersecting individual lives that she so skilfully weaves. The characters are never entirely subsumed by the sweep of history, either distant or recent, though, like the ghost of Flora, it threatens to overwhelm them at all times.

In a 2016 New Yorker essay on the Standing Rock pipeline protests, Erdrich writes about the way that history is a living force in the Lakota way of life. ‘Each of the great events in their common destiny includes the direct experience of ancestors, whose names live on in their descendants.’ By the end of The Sentence, the reader comes to realise that perhaps a novel full of ghosts, in all their different guises, is exactly the right thing for our own haunted, and haunting, times. 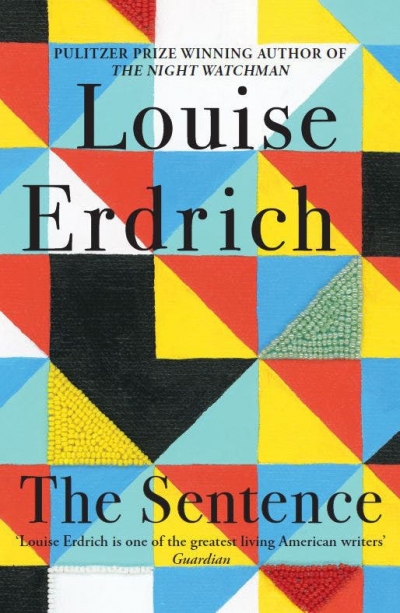