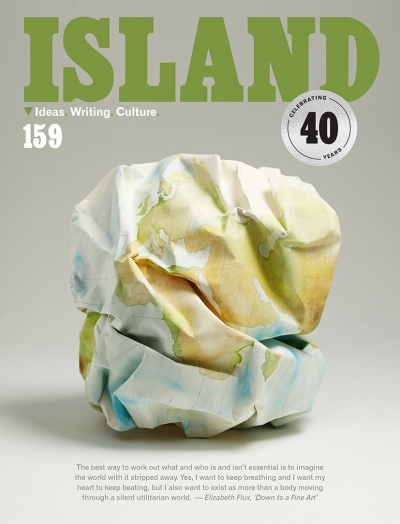 Over the past forty years, Island has published some of Australia’s most celebrated figures, yet its standing as a relatively small not-for-profit and print-only publication has made it an ideal nursery for emerging and marginal voices. Island’s precarious financial position was severely tested in 2019 when, like other highly respected publications, it was denied a renewal of multi-year state government funding, making the appearance of Issue 159 (made possible by a once-only government grant matched by an anonymous private donor) seem as miraculous as sighting a Swift Parrot among the blue gums on a winter morning.

Unsurprisingly, the contents of this issue cohere around a common theme: that when productivity becomes our only framework for assessing value and usefulness, our ecological and cultural survival are similarly endangered. Sam George-Allen’s essay on the simple, life-affirming joys of starting a garden from scratch (‘Principles of Permaculture’) is contrasted with a bitter triptych of the mechanised capitalist psyche in Andrew Roff’s story ‘The Lever, the Pulley, and the Screw’. The profound grief evoked by Julie Gough’s installations on Aboriginal dispossession and genocide (Mary Knights) is mirrored in the repressed, wordless rage of a young man in Christine Kearney’s story ‘Stingrays’. Jonno Revanche’s essay on Kylie Minogue and Pip Smith’s story of an elderly baker explore the angelic and demonic aspects of embattled femininity, while poets such as Jake Goetz (‘Ash in Sydney’) and Toby Fitch (‘Pink Sun’) remind us how quickly last summer’s devastating bushfires slipped from the headlines. Such an eclectic, invigorating collision of perspectives leaves one hopeful that, just as public outcry against the Franklin Dam led to the creation of the Tasmanian Wilderness World Heritage Area (and Island magazine), audiences will unite to support the arts and the real people making them happen. 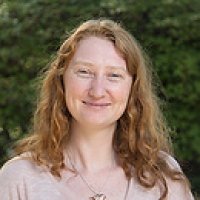 Rayne Allinson is a writer based in southern Tasmania. She has a DPhil from the University of Oxford, and is the author of A Monarchy of Letters: Royal correspondence and English diplomacy in the reign of Elizabeth I (2012).

Rayne Allinson is a writer based in southern Tasmania. She has a DPhil from the University of Oxford, and is the author of A Monarchy of Letters: Royal correspondence and English diplomacy in the reign of Elizabeth I (2012).