Syria’s Secret Library: Reading and redemption in a town under siege by Mike Thomson

‘War is only the superficial face that you see first. Underneath that, there is so much humanity, so much else taking place. There may be death but there is also normal life here too.’

A rebel stronghold on the southern edge of Damascus, the Syrian suburb of Daraya, was violently isolated by the Assad regime for almost four years – a ruthlessly protracted attempt to starve out the city’s pro-democracy insurgency. Power and water supplies were cut, crops were burned, and humanitarian aid was barred. There was no food, no medicine, and no way out.

In August of 2016, after 1,368 days of privation and more than 9,000 shrapnel-filled barrel bombs, a deal was struck between the rebels and regime forces to evacuate the defiant, ruined city, still home to thousands of people. As the citizens of Daraya readied to leave – ‘uprooted from their homes and heading into the complete unknown’ – they made sure to return their library books. Each of the 14,000 volumes in Daraya’s collection had been hard won, saved from burning apartments and municipal wreckage under threat of sniper fire, and preserved in a hidden basement. In Daraya’s final hours as a living city, the university students who had established the library worked frantically to safeguard its treasures by sealing over the entrance. A capsule of hope.

BBC journalist Mike Thomson first reported the tale of ‘The Secret Library’ in a podcast for Radio 4, which aired mere weeks before Daraya emptied and the library had to be abandoned. ‘It got a heart-warming reception,’ Thomson recalls of his award-winning feature, but ‘there was so much more to say’. So arrives Syria’s Secret Library, a tender account of this underground literary sanctuary and the dauntless, young bibliophiles who risked their lives to build it. ‘We began by planting vegetables,’ Shakespeare buff and co-founder Abdul Basit explains, ‘but soon realised that we needed to feed our minds too.’ 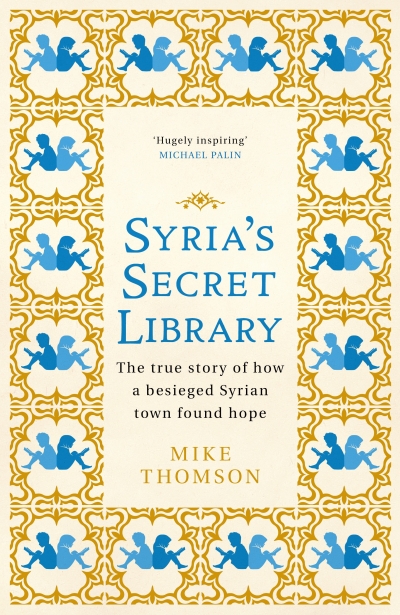 Syria’s Secret Library: Reading and redemption in a town under siege