The Enchantment of the Long-haired Rat: A rodent history of Australia by Tim Bonyhady

The enchanting of rats has a long history. The Pied Piper, who enchanted first the rats then the children of Hamelin, is familiar to European readers. Here, Tim Bonyhady brings us a new story of rat enchantment by the Diyari and the Yandruwandha people in the eastern Lake Eyre basin. According to explorer Edwin Welch, they sang ‘in low, weird and dirge-like tones’ that drew the rodents from their burrows, then clubbed them on the head with a waddy until they had sufficient to eat.

A Rodent History of Australia is an ambitious task, and a timely one, as the native rodents of Australia have suffered massive losses over the period of European settlement: indeed, Australia leads the world in small-mammal extinctions. It is a real challenge to inspire the imaginative leap to care about a native animal known as a ‘rat’ – whether it is ‘Long-haired’ (vernacular) or Rattus villosissimus (the ‘most vile’ of rats). Even more difficult when it appears en masse, as a plague or irruption, and eats everything in sight, even the boots of the man recording its presence.

Bonyhady first came across the rat when he was writing his ground-breaking book Burke and Wills: From Melbourne to myth (1991). His own enchantment began with stories of the surging waves of rats that upended the country, destroying all traces of the Burke and Wills party. Nearly three decades later, with a new urgency to understand the climatic patterns of our ancient land, Bonyhady has recast his history of Australia with the rat itself as a key figure.

Libby Robin FAHA is a prize-winning author of sixteen books, including How a Continent Created a Nation, The Flight of the Emu and Boom and Bust: Bird stories for a dry country. She is Emeritus Professor at the Fenner School of Environment and Society, Australian National University and has worked with a number of museums including the National Museum of Australia and the Deutsches Museum, Munich, Germany. Her latest book, The Environment: A history of the idea (co-authored with Paul Warde and Sverker Sörlin) was published by Johns Hopkins University Press in October 2018. 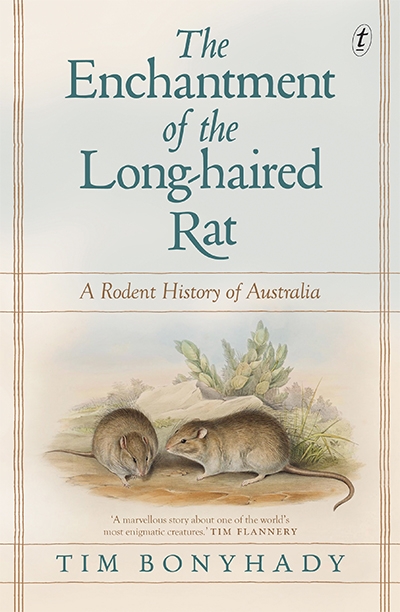 The Enchantment of the Long-haired Rat: A rodent history of Australia