The Testaments by Margaret Atwood

There was never any question that The Testaments, Margaret Atwood’s coda to The Handmaid’s Tale (1985), would be a gargantuan blockbuster, a publishing Godzilla, giddily hyped and fiercely embargoed. Bookshops across the world counted down the minutes until midnight on September 10 (GMT), when the envy-green volume – already the odds-on favourite for the Booker Prize – could be unboxed. One hundred and forty-five journalists travelled from fourteen countries to cover the London launch; in the United Kingdom alone, a hardback copy was sold every four seconds in the book’s first manic week.

The Handmaid’s Tale was an ‘anti-prediction’ or literary inoculation, Atwood explained in a 2017 essay: ‘If this future can be described in detail, maybe it won’t happen.’ Penned in 1984, that Orwell-haunted year, early reviews praised Atwood’s artistry but declared the dystopian horror of her post-American patriarchal theocracy, where fertile women are kept as captive breeders while environmental catastrophe looms, to be outlandish. Now, a boastful sex-pest is in the White House, the world’s schoolchildren are striking for action on the climate crisis, and women dressed as handmaids, at rallies in defence of their reproductive rights, carry signs that read ‘Make Margaret Atwood Fiction Again’.

Atwood’s reluctant prophecy has furnished us with an iconography of female resistance: crimson capes and snow-white bonnets. It has also provided the source material for a lauded, grisly television series (2017–). You could buy handmaid costumes this Halloween and add a surveillance ear tag or scar to mimic the televisual torment. As Jia Tolentino writes so incisively in The New Yorker: ‘The Handmaid’s Tale has long been canonical, but was once a novel. It is now an idea that is asked to support and transubstantiate the weight of our time.’ The frenzy around the release of Atwood’s new book is a defiantly joyful celebration of this idea, equal parts pop-cultural cool and revolutionary zeal. Nolite te bastardes carborundorum, bitches.

The Testaments could never live up to its predecessor; what an impossible yardstick. No book could compete with thirty-four years of readerly devotion, let alone this mighty collision of Zeitgeist. To measure it against The Handmaid’s Tale is to focus on the wrong literary legacy. What matters is how this new work – in so many ways the obverse of its forebear, its mirror twin – unwittingly damages what came before. 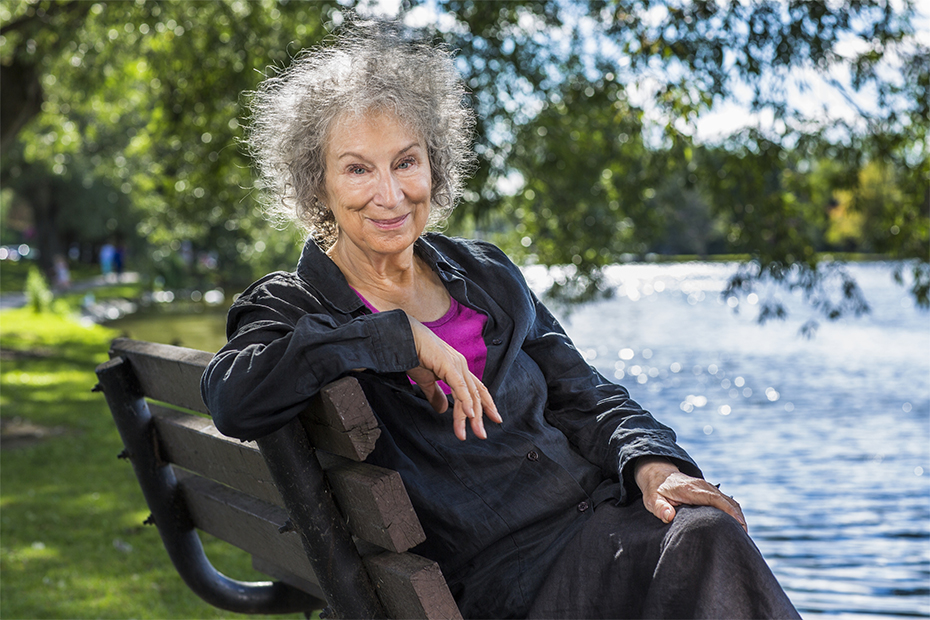 For three decades, Atwood resisted calls to extend The Handmaid’s Tale. She could not imagine reinhabiting the novel’s quietly mutinous heroine, Offred. ‘You can climb the Empire State Building barehanded once,’ the author explained in a recent interview with The New York Times. ‘When you try again, you’ll fall off.’ Impelled by Donald Trump’s election in 2016, she found her way back into the Republic of Gilead’s autocratic universe by considering the fate of its second generation.

Fifteen years ago, Offred stepped resolutely into an unmarked van: ‘whether this is my end or a new beginning, I have no way of knowing’. The former handmaid has survived, smuggled across the border into Canada with her baby, who has become a ‘poster child for Gilead’. The republic is intent on reclaiming ‘Baby Nicole’ as a matter of increasingly urgent national pride: ‘for God’s kingdom on earth, [Gilead] had an embarrassingly high emigration rate’. Gileadean ‘missionaries’ roam suburban Canada, hunting for leads and for vulnerable young women – ripe-wombed and wretched – to entice over the border.

In Toronto, sullen teenager Daisy is sick of hearing about the missing child, who would now be her age: ‘I’d basically disliked Baby Nicole since I’d had to do a paper on her ... I’d got a C because I’d said she was being used as a football by both sides, and it would be the greatest happiness of the greatest number just to give her back.’ Daisy’s textbook angst masks a deeper unease: the couple she knows as her parents are twitchy and aloof, too careful with her: ‘It was like I was a prize cat they were cat sitting.’ Meanwhile in Gilead, Agnes Jemima is being prepared for marriage: ‘Wedlock: it had a dull metallic sound, like an iron door clicking shut.’ Suitors circle, including the odious Commander Judd, whose too-young wives have a convenient habit of perishing once the sexagenarian letch gets bored with them. Agnes’s only alternative to marriage is to pledge herself to the Aunts, Gilead’s puritanical coterie of taser-wielding uber-nuns.

It is the notorious Aunt Lydia, architect of Gilead’s handmaid system of socially sanctioned rape, and an assiduous keeper of its leaders’ most incendiary secrets, who is the dark heart of The Testaments – J. Edgar Hoover in an itchy brown habit. A high-ranking Gileadean is collaborating with the activists who liberated Offred and Baby Nicole. Aunt Lydia knows the identity of the mole, but she also knows that the republic is politically shaky; there is a possibility here, not for power (she is already ‘swollen’ with it) but for vengeance. A regime-toppling revolution would just be a gratifying side effect.

Simultaneously a sequel and prequel, The Testaments alternates between Daisy’s and Agnes’s witness statements to an unknown authority, and Aunt Lydia’s furtive journal, tracing her ascendancy from prisoner to power broker: ‘Over the years I’ve buried a lot of bones; now I’m inclined to dig them up again – if only for your edification, my unknown reader.’

The girls’ intersecting stories are forgettable fun – an exuberant, escapist romp. When covert geopolitical machinations conspire to bring them together, their odd-couple dynamics – arse-kicking, streetwise, smartarsed Daisy versus pious, wide-eyed, bookworm Agnes – are the stuff of buddy-cop action movies (‘You want to have this conversation right now? I am fucking sorry, but we are in a hot mess emergency here!’). We always know who the good guys are; the bad guys get walloped in the windpipe.

There is more than an echo of The Hunger Games in this teen-saviour subplot, replete with a transformation montage, as Daisy, anointed by destiny, trains for a secret mission to bring down Gilead from within – from sulky teen to warrior queen. It’s a fascinating cultural loop, watching Atwood play in the genre her 1980s novel helped to invent. But it is Aunt Lydia we have come to see, the novel’s slippery, ruthless ringmaster. A family court judge in her pre-Gilead days, she is not interested in apologies or absolution: ‘Regrets are of no practical use. I made choices, and then, having made them, I had fewer choices.’ Her account of those choices – some desperate, some conniving, all ferociously pragmatic – is a potent reminder that complicity is not evil but banal, easy, and often terrifyingly sensible. ‘Two roads diverged in a yellow wood, and I took the one most travelled by,’ she explains with characteristic frankness. ‘It was littered with corpses, such roads are. But as you will have noticed, my corpse is not among them.’

Aunt Lydia is a deliciously acerbic companion, a master strategist who is as loathed as she is legendary, as proud as she is disgusted with what she has wrought. Atwood delights in her paradoxes. But there is nothing we learn about Aunt Lydia that we could not have imagined when we first met her in The Handmaid’s Tale. In that novel, her imperious cruelty inspired speculation: zealot, victim, collaborator, psychopath, sadist? All of the above, perhaps, or none at all. Now we know.

In the last pages of The Handmaid’s Tale, having spent the novel immersed in Offred’s insistent mind, we learn from a panel of future historians that her account may not be real. Atwood’s final line is an audacious postmodern wink: ‘Are there any questions?’ Of course we have questions, we burn with them. Her book’s brilliance was always its obdurate, careful silences. Yet now she has returned to Gilead with bountiful answers – comeuppances to administer, loose ends to snip, almost in rebuke to her original premise. ‘The Testaments was written partly in the minds of the readers of its predecessor, who kept asking what happened after the end of that novel,’ Atwood explains in her acknowledgments. It is a particular curse, to get exactly what you ask for. In our culture of entertainment maximalism – of reboots, sequels, reunions, and peak television – we seldom question the notion that every space should be filled. If we love a cultural product, surely we should have – we deserve – more of it. But there’s a fine line between cultural glut and cultural gluttony.

As Agnes Jemima reflects: ‘Where there is an emptiness, the mind will obligingly fill it up.’ Here is the unnecessary tragedy of Atwood’s coda, captivating though it is (this is Margaret Atwood, after all). The dark hollows and crannies of The Handmaid’s Tale are mostly gone, and with them, space for obliging minds. The only space that’s left is a convenient time gap – room for the Hulu/MGM series to brutalise its way onwards.

Where there was doubt, now there is certainty; where there was an imagined future, now there’s a satirised present, replete with fake news, mistrusted experts, and echoes of #MeToo – undeniably timely but forever anchored. And where there was restrained interiority, now there is plot, plot, plot – whizzing and fizzing along. A tale to gobble, not to savour. The human truth beating at the heart of The Handmaid’s Tale was that Offred was ordinary, she could have been anyone. In The Testaments, as in the television show, she has been recast as Gilead’s political keystone, her story no longer a serendipitous insight but the too-convenient beginning of a grand fairy tale of the resistance. Atwood’s Gilead project is no longer about ordinary women and the quiet power of witness, but about extraordinary, fantastical heroism. Farewell Anne Frank, hello Katniss Everdeen.

Fairy tales demand happy endings, and Atwood is inclined to oblige. Perhaps, having unwittingly summoned a monster thirty-five years ago, she is trying to use her literary sorcery to conjure a more hopeful future for us, an injection of cultural optimism and aspiration in a despondent political age where, as Aunt Lydia describes: ‘giving up was the new normal, and I have to say it was catching’. Or perhaps she is just having a boatload of fun. Canada’s most famous novelist doesn’t have to give a rat’s hindquarters about her legacy: ‘Will this ruin my future, my literary reputation? If I were thirty-five, you would be absolutely right to ask that question,’ she told The New York Times. ‘But it’s not a chief concern of mine.’

Fair enough. But having read The Handmaid’s Tale nearly every other year since I was sixteen, I can’t imagine when I’ll return to it again – not as some petulant tantrum, but because there’s no space for me in the novel anymore, I’ve been forced out. I’ve gained a sequel, and lost something far more precious. 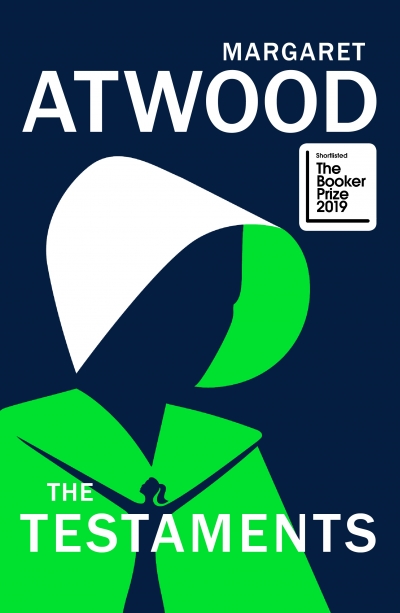