Permanent Revolution: The reformation and the illiberal roots of liberalism by James Simpson

The argument of James Simpson’s Permanent Revolution is that the emergence of liberalism as a cultural and political category in the sixteenth and seventeenth centuries was shaped by the ‘radically illiberal history of Protestantism’. Rather than adhering to the ‘triumphalist’ tradition of Whig historiography that regarded the Glorious Revolution of 1688 and its subsequent Bill of Rights as the exemplification and precursor of a great tradition of English liberalism, Simpson suggests instead that the development of liberalism was inextricably entangled with religious dogmatism and intolerance. He points out that, while executing five hundred women for witchcraft between 1566 and 1645, England judicially murdered more Catholics than any other country in Europe between 1580 and 1600, so that the elucidation of ‘free’ thought always encumbered darker shadows.

The larger repercussions of this thesis involve a reconceptualisation of the British Enlightenment as in almost every respect ‘the reflex of religious culture’, as well as a sense of modernity itself as having ‘a variety of faces, one of which is revolutionary, illiberal evangelical religion’. Though Simpson does not push present-day analogies too far, there are clearly implications here for understanding the broader contexts of ‘Contemporary Liberalism’, whose proclivity towards ‘identitarian politics’ he understands as being interwoven at structural levels with the ‘continuing influence of evangelical religion’. 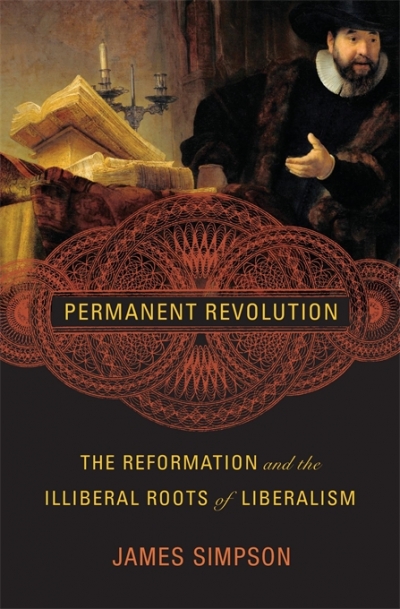 Permanent Revolution: The reformation and the illiberal roots of liberalism