Dear Editor,
How sad it is that the Australian political leadership is so inept, so hostage to minority interests – in this case, those of the conservative Christian variety. This in a country in which:

Dear Editor,
My only quibble with the excellent article is the following words: ‘homosexuality remains one of the principal causes of suicide’. Any sexual preference doesn’t cause anything, rather it is how society responds to a person’s choice. On the other hand women might suggest that pregnancy be a direct cause of heterosexual behaviour ...

David Toma was quite right to fault my loose wording. That sentence should have read, ‘Even now, homophobia and violence towards homosexuals remain principal causes of suicide and despair in our society.’

Dear Editor,
How very well put! If only we could hope that some influential members of parliament were listening and intelligent enough to process it. What a sorry chapter in Australia’s political history. What should have been so simple to be made so stupidly political, labyrinthine, and expensive. We should all be ashamed.

Dear Editor,
I have just read the Peter Rose’s Comment regarding same-sex marriage. I then searched the magazine for a page devoted to the other side of the debate, the No vote. This did not exist. I am astounded and disappointed that this publication should treat your readers so poorly. A debate, after all, is a two-sided matter. You insult your readers by presenting only half the argument.

Dear Editor,
Thank you for articulating so eloquently what many of us feel. Aside from the fundamental question of equal rights, spending $122 million on an opinion poll that won’t be binding on members of parliament is an outrage. Of course, the reason for all this is the power that the religious right exerts on government.

I am pleased that Ms Macleod thought my Comment ‘bold and fiery’. It was intended to be. Her use of ‘tizzy’ is curious – and loaded of course. Perhaps some of those people who do not belong to a minority that has been ‘insulted, blackmailed, beaten, incarcerated, and murdered’ cannot understand gay and lesbians’ dismay at the mean-spiritedness and illogicality of the No case.

And as for: ‘Changing the Marriage Act would cause social chaos’ – that’s the sort of intemperate rhetoric we expect from Cory Bernardi. 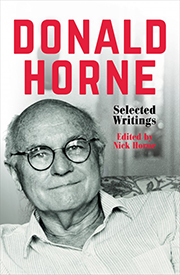 In an otherwise fine review of Nick Horne’s editing of his father’s writings, Ryan Cropp comments in passing that ‘remarkably little ink has been spilled chronicling the lives of Australia’s intellectuals, those writers and thinkers whose ideas changed the way Australians think about themselves and the world they live in’ (ABR, August 2017). Stuart Macintyre, Judith Brett, Robert Manne, Jill and Michael Roe, Tom Griffiths, Tim Rowse, Race Matthews, Clive James, amongst many others, would be surprised to see their many pages of ‘spilt ink’ ignored by this claim. In particular, Peter Beilharz’s Thinking the Antipodes: Australian essays (2014) has chapters dedicated to specific thinkers ranging from John Anderson, Vere Childe, H.V. Evatt, Bernard Smith, Robert Hughes, George Seddon, Hugh Stretton, Jean Martin, through to Peter Carey. Donald Horne gets a guernsey, but not his own chapter. Go figure. Better still, go read.

Trevor Hogan rightly observes that there has been some fine ink spilled on the subject of intellectuals in Australia. Perhaps my metaphor was imprecise – the intention of my comment being that such figures as he lists barely register in popular memory. Outside particular circles, the appetite for intellectual biography in Australia remains (lamentably) poor, especially in contrast with cricketers and war heroes.

Dear Editor,
It’s a dangerous thing to make the human abstract, and this is what Danielle Celermajer does in her review of Yitzhak Rabin: Soldier, leader, statesman, by Itamar Rabinovich (ABR, September 2017). This book, after all, is the biography of a man, not the political history of a nation, despite the big role that Yitzhak Rabin played in that. 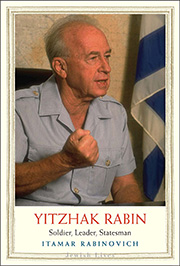 Celermajer has chosen to present this work through her own political perspective of the modern State of Israel, which appears to preclude any idea of Palestinian responsibility for their fate. She has been tempted to read Rabin’s biography ‘as a story of the State of Israel’. Her evaluation of that story distorts historical facts by omission and/or inversion, pays no attention to the important aspect of the origins of a Jewish homeland, and overlooks Rabin the man. It gives ABR readers no idea of the content, flavour, or texture of the book.

Celermajer hypothesises the 1948 War of Independence as ‘an act of violent colonialism’, thereby damning Rabin as complicit. The war was in fact initiated by Jordan, Egypt, Syria, Lebanon, Iraq, and Saudi Arabia on the announcement of Israel as a nation State.

Rabin is quoted as saying that his country was his life. For him that meant part of his heart and soul, not just his life as a political project or his ideological or religious beliefs. Rabin and the author of his biography deserve more than the philosophical/political judgement Celermajer has meted out.

One of the greatest challenges to achieving justice and peace in our era is to bridge the gaping chasm between people of different political persuasions and commitments. Nowhere is this more evident than with respect to Israel and Palestine. My response to this letter will not speculate on why the author has misread my review to the extent she has. I simply wish to set the record straight. The review does not hypothesise that ‘the 1948 War of Independence’ was ‘“an act of violent colonialism”, thereby damning Rabin as complicit’. It states that if a reader comes to the biography with an obdurate view that this is an accurate description of that war, then their damning Rabin as complicit will follow as a matter of course. Indeed, the very next sentence contemplates the interpretative arc of a reader at the opposite end of the political spectrum, one who views Oslo ‘as a betrayal of the Jewish people’ and thus is bound to judge Rabin as a ‘reckless traitor’.

My hope in beginning my review with these portraits of two hypothetical readers, and the tragic inevitability of their divergent responses, was to encourage each of us to reflect on how our own preconceptions render us impermeable to information that does not conform with our pre-existing schemas. There is of course much one could choose to emphasise in the biography of a life as rich as Rabin’s. I chose to illuminate in particular those creative qualities that enabled him to break with the seeming inevitability of large social and political forces in order to bring new and unexpected possibilities into existence. Training our eyes on this human quality was, and remains, my attempt to invoke him as an exemplar that we might emulate.