There has been an argument going on in the Liberal Party about the nature of the Menzies heritage – was Robert Menzies, the founder of the modern party, a liberal or a conservative? Notably absent from this discussion has been the national figure who was the first leader of a united anti-Labor party and who also happens to have been a father of Federation, Alfred Deakin. If our politicians still read books – and sometimes one does wonder – Judith Brett’s new biography, The Enigmatic Mr Deakin, should be required reading. As Brett has pointed out, the minority governments of the Federation’s first decade were extraordinarily productive in laying the legislative foundations of the new Commonwealth, in stark contrast to the parliamentary paralysis of recent years.

Australian academic historians were slow to embrace biography, tending to regard a book about the life of one person as not being ‘real’ history, which they saw as requiring a capacity to generalise. J.A. La Nauze’s two-volume biography of Deakin (1965) did much to change attitudes, but that was more than fifty years ago, and although much has been written about Deakin and the politics of Federation since then, there has been a need for a new synthesis, a new ‘life’, for our times. Brett is well equipped for the task, knowledgeable in the politics of anti-Labor as the author of Robert Menzies’ Forgotten People (1992) and Australian Liberals and the Moral Middle Class (2003). La Nauze began his biography in traditional style, describing the voyage of Deakin’s English immigrant parents, William and Sarah, to Australia. Brett, on the other hand, cheekily sets up a comparison of Alfred, born in Melbourne in 1856, with another native-born Australian, Ned Kelly, born just one year earlier. Deakin actually witnessed Kelly’s hanging in 1880, possibly as a representative of The Age, but it seems we don’t know how he reacted to the execution. The son of an Irish convict, Kelly has been incorporated into one version of the Australian legend associated with the unionised shearers. But Deakin, Brett suggests, as a middle-class, religiously inclined intellectual, ‘sits uneasily as a representative Australian figure’. Courteous, well-educated, urbane, and much liked, ‘Deakin was never a mate’. For all his charm and friendliness (he acquired the nickname ‘Affable Alfred’), ‘he always held himself a little aloof’. A Canberra suburb, a federal electorate, and a university bear his name, but most Australians would have no idea who this Deakin was. Why should we know him better? What might he have to say to us? 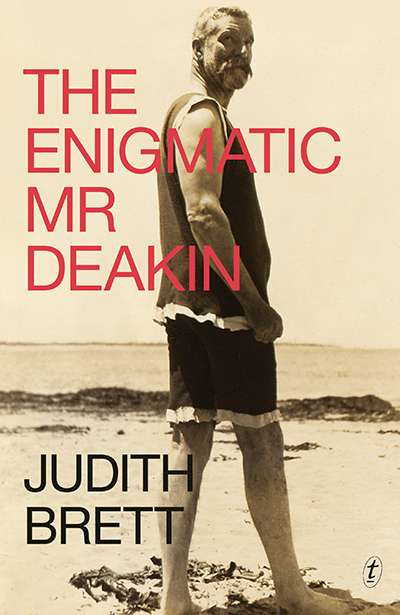