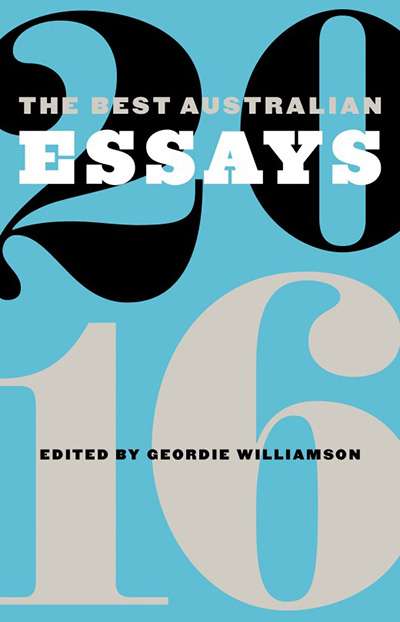 An annual challenge: how to select essays which capture the moment but live beyond the immediate?

For some, rigour matters. The series editor for The Best American Essays invites magazine editors and writers to submit contributions to a Boston postal address. The rules are strict: an essay is a literary work that shows ‘an awareness of craft and forcefulness of thought’. It must be printed during the year, in full, in an American periodical. Unpublished work cannot be considered, nor extracts from longer works. The endless flow of submissions is reduced to just 100 potential essays and submitted to a guest editor – in 2016 Jonathan Franzen. The resulting volume includes a list of essays considered, so readers can test their judgement against the editor.

Geordie Williamson, critic and Picador publisher, takes a more expansive view. There are unpublished essays in The Best Australian Essays 2016: from Vicki Hastrich on art and death, and an unflinching reflection on her vagina and childbirth by Tegan Bennett Daylight. Most contributions touch on an Australian theme, though several essays do not. Williamson has curated carefully but says little about his editorial decisions. There are essays from fifteen women and fourteen men, with the women published first. The collection pivots on a discussion about football by Anna Spargo-Ryan, a homage to her grandfather’s deep love of the Norwood Reds,gently shifting the voice from female to male. Williamson has commissioned some pieces, sourced others from small magazines and web publications. Every rule offered by the American guide is broken somewhere, usually to good effect.