Victoria: The Woman who Made the Modern World by Julia Baird

The Empire over which Queen Victoria ruled for more than sixty years no longer paints the globe red. Yet Victoria is still ubiquitous. She is memorialised in the Commonwealth of Australia – formally proclaimed just three weeks before she died on 22 January 1901 – in the names of two states and innumerable other places, along with material objects like statues and portraits. The popular image of her is impassive and monumental, while ‘Victorian’ as an adjective is generally pejorative, implying earnestness in all things, and repression in most.

Julia Baird’s ‘intimate biography’ sets out to question such assumptions. Historian by training, journalist by profession, the Australian Baird was encouraged to take on the project by her editor at Newsweek during the 2008 US presidential election, stimulated initially by questions to do with women and high office.

Baird’s thesis is a deceptively simple one, encapsulated in the title ‘Victoria the Queen’, with its implicit tension between the woman and the monarch. The historian approaches her task sharply attuned to the accreted layers of interpretation that surround her subject. Her declaration in a ‘General note’ preceding nearly 120 pages of annotation may appear to be the manifesto of a very literal empirical historian: ‘All passages that discuss what Victoria was thinking, feeling, or wearing are based directly on journal entries, letters, and other contemporaneous evidence’ duly referenced. In fact, the note announces a mission of recuperation, both of material not previously utilised, and of documentary sources that have been demonstrably manipulated: Victoria’s journals by her youngest and longest-surviving child, Beatrice; her letters by ‘Two old Etonians’ who ‘warped our view of Queen Victoria for decades’. The meta-narrative of how the life of Queen Victoria has been written is continued into the present, in a scrupulous account of the barriers that Baird encountered even to gain access to material in the Royal Archives. Only with the intervention of Quentin Bryce as governor-general of Australia did Baird gain admission, but although she acknowledges exemplary assistance from the Keepers of the collections, she also describes an attempt to restrain her from publication of certain material (diaries of Victoria’s last medical attendant, Sir James Reid – which in fact had already been published, and in any case do not form part of the royal collection). The sore point is the queen’s relationship with her Scottish servant John Brown. Baird maintains convincingly that it was extremely close, whether a physical affair in her view ‘not proven’. Certainly, what she uncovers about royal sensitivities over time provides unequivocal demonstration that generations of the royal family and their retainers have been extraordinarily defensive about Victoria’s relationship with the man her children and household referred to as ‘the Queen’s stallion’. 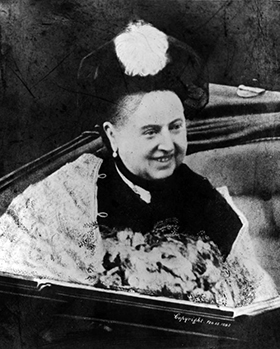 Queen Victoria smiling at her Golden Jubilee in 1887 (photograph by Charles Knight, Wikimedia Commons)Baird gives Victoria both personality and physical presence. She offers a child wilful and prone to outbursts of temper (a tendency evident throughout her life), who developed and maintained strong attitudes and opinions not always consistent with each other. She was a talented artist. This Victoria is a working woman, no cipher, who took her job seriously and to the end of her life actively participated in the business of government to the point of being meddlesome, for instance in the conduct of the African wars of the late nineteenth and early twentieth centuries. The extraordinary dialectic between her paramount regal authority and uxorial submission to husband as master is demonstrated in detail.

Albert, the Prince Consort, has a starring role, with applause both for his abilities as statesman, organiser, and entrepreneur, and for his lesser-known capacity for tenderness and fun. Whatever his health issues – he is said not to have been strong, and Baird conjectures that he may have suffered from Crohn’s disease – he was evidently virile. Baird is explicit about Victoria’s high libido and its correlate, her obstetric history. She bore nine children between 1840 and 1857, welcoming the availability of chloroform for her eighth confinement (the haemophiliac Prince Leopold in 1853). She considered breastfeeding abhorrent and didn’t much like babies, but warmed to children: it is curious, if perhaps irrelevant, that she detested cruelty to animals.

In the short to medium term, her absorption by childbearing and rearing gave the opening for Albert to become king in all but name. In the longer term, she suffered the consequences. Postmortem examination showed a prolapsed uterus and ventral hernia, apparently never diagnosed or treated, both painful conditions liable to further physical repercussions. It is also salutary to be reminded that several times throughout her reign there was concern that Victoria might have porphyria and be going mad. It is now conjectured that she and her oldest child, Vicky, had a mild version of the poorly understood disorder that overtook her paternal grandfather, George III. 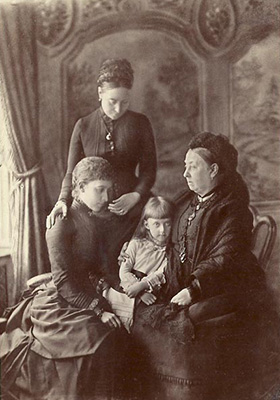 Queen Victoria at right, flanked by her daughter Victoria, Crown Prince of Prussia, her grand-daughter Charlotte, Princess Bernhard of Saxe-Meiningen and with her arm around her great grand-daughter Princess Feodore of Saxe-Meiningen (photograph by Carl Backofen, Wikimedia Commons)Baird reminds us that Victoria lived and reigned for a very long time, but does not privilege any one period: hence attention to her birth and childhood, through accession, marriage, the histrionic mourning for Albert, down to her apotheosis as queen empress. Received accounts are persistently qualified by fresh research and new readings of previous studies. Throughout there is illumination, often of what might have been, beginning with the race to produce an heir among the six brothers of George IV. The succession, not only to the British throne, but to many European kingdoms and lesser domains, was a constant concern of Victoria and Albert from the birth of Princess Victoria in 1840 on. Often it is the sidelights that are most telling. So we learn that after the lengthy ritual of her coronation and procession through London, the queen returned to Buckingham Palace and washed her dog Dash. Such detail is largely responsible for the originality and liveliness of this biography, and the impressive concision and authority with which major political, social, and economic issues are discussed. Baird’s learning is substantial, and lightly worn.

This volume is itself monumental, and like its subject a triumph of thoughtful discipline. In round figures, it is 750 pages of which 250 are apparatus. I confess to loving a good index, and this is one, and I was gratified by having also a ‘Cast of Characters’ with a paragraph on each, excellent maps – very useful and left to tell their own tale – a judiciously pruned family tree, and generous notes. Among the many illustrations, some in full colour, there is a rare photograph of Victoria smiling, taken during her Golden Jubilee celebrations in 1887. The image exemplifies the unexpected perspectives on Victoria the Queen developed in this important and at times enthralling study.

Margaret Harris is Challis Professor of English Literature Emerita at The University of Sydney. 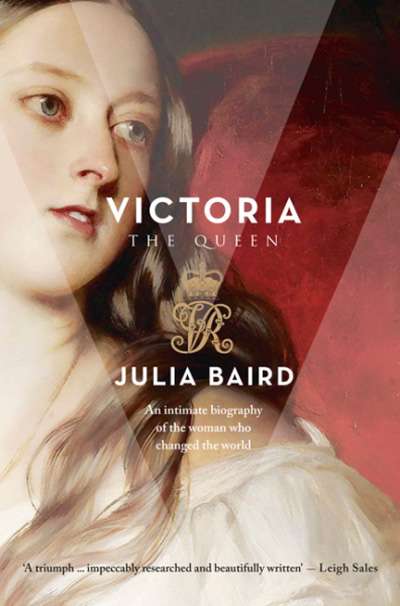 Victoria: The Woman who Made the Modern World