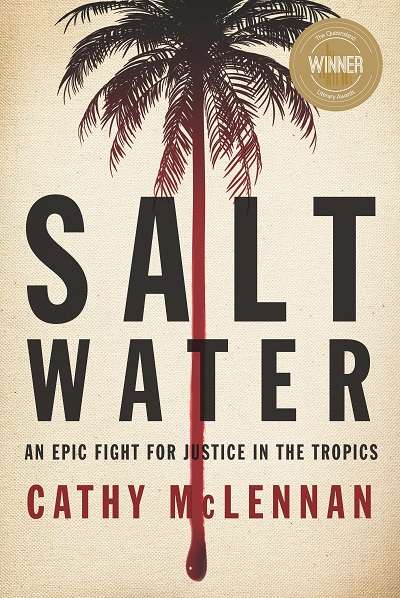 This book is likely to anger many readers. Saltwater is about Cathy McLennan’s time as a barrister for the Aboriginal and Torres Strait Islander Legal Service on Palm Island and in Townsville in the 1990s. Aged twenty-two and faced with a heavy workload, she was confronted with heartbreaking cases of violence, trauma, and neglect. Other lawyers in the office came and went, but the Aboriginal field officers remained constant. Throughout, there are reminders that Palm Island is a beautiful place with forests and crystalline water, despite its being referred to as ‘the most violent place on earth outside a war zone’.

McLennan focuses on the murder of a white man named Peter Lewis that occurred on Palm Island. She introduces the reader to the four young Indigenous people accused of the crime: Albert, eighteen, possibly brain-damaged; Dillon, seventeen; Malachi, sixteen, described as having a ‘snake-eye look’; and the youngest boy, Kevie, thirteen. The mother of Malachi and aunt of Dillon is Tanya Butler, a tragic figure violently abused and assaulted by her white husband, who also abused his three sons from the time they were babies. He is in prison for domestic violence. We follow their fates over the course of the book, and learn how difficult Tanya’s life is, holding on to the hope that her youngest son won’t go the way of his two brothers.