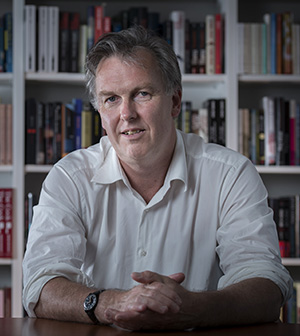 In 1979, when I was twenty, I took Vincent Buckley’s poetry seminar at Melbourne University. He introduced us to the work of the Northumbrian poet Basil Bunting, by then in his late seventies. That summer I went to Britain in pursuit of Bunting. In Newcastle I knocked on the door of Bloodaxe Books and explained my mission to Neil Astley, the publisher. It was the first publishing office I had ever been in. I thought: this is what I am going to do. Neil phoned Bunting and I caught a bus to the council estate where he lived. We talked until the light faded. My future had found me. After I came back to Melbourne, I set up Scripsi with Peter Craven.

Name the first book you published.

Smoking by John A. Scott, a book of poetry we published at Scripsi in 1983.

Do you ever edit the books you commission?

What are the qualities you look for in a new author?

A voice, a hunger to write, to be read, to take risks.

Editing provides the greatest pleasure and the greatest pain. If I couldn’t edit, I would stop publishing. Editing, a secret exchange in which one plus one can equal three, remains a riddle to me. Publishing is an endless series of conversations, but the editorial conversation is the most mysterious of them all.

I wrote a book a long time ago about the ‘Ern Malley’ poetry hoax. It’s a publishing story. Doing that book taught me something about what it could mean to publish a book in this country. And it offered me the experience of sitting on the author’s side of the desk. My book was edited by Robert McCrum, who was editor in chief at Faber & Faber. He opened a door. He showed me how you could shuffle a manuscript like a deck of cards, but he never made me feel that my book was being taken away from me. He encouraged me to find my own solutions. He was teaching me not only how to be a writer but how to be an editor too.

Diana Gribble, who, with her partners, founded two publishing companies, McPhee Gribble and Text. Maxwell Perkins, editor of Fitzgerald and Hemingway, who was fond of saying that a book could be the most important thing in the world. Kurt Wolff, Kafka’s first publisher, who later founded Pantheon and who once said, ‘A publisher’s relationship with his author must be like a love affair in which he asks nothing and has already forgiven every failing in advance.’

I don’t think so. Publishers are always seduced into taking on books that resemble what has already been published, but original and distinctive books will find a path. Lookalike publishing mostly gets what it deserves. The past is there to remind us of the singular books it contains, but we forget how many more had no lasting value at all. In a competitive market books matter, and individuality can shine through because writers have a genuine choice about who they want to publish them. The key to a competitive market is creative diversity: to have different kinds of booksellers, different kinds of publishers.

Each is equally gratifying, and any one of them can help compensate for the absence of the others. The holy grail is all four at once.

What’s the current outlook for new Australian writing of quality?

It has never been brighter, if only we can do what the writers demand of us. The place is stuffed with gifted writers and gifted readers. The whole point of publishing is to connect these two groups as early and as often as possible. We need more publishing companies so we can train readers to identify the talent around us and bring it to market. The writers, now and to come, are waiting for us.

Michael Heyward is Publisher at Text Publishing and author of The Ern Malley Affair (1993).