Phillip Schuler: The remarkable life of one of Australia’s greatest war correspondents by Mark Baker

Who was Phillip Schuler? A war correspondent for The Age, his six-week visit to Gallipoli in July and August 1915 produced, inter alia, a few of the rare eyewitness accounts of the battle and resulted in the first extended treatment of the Gallipoli campaign: Australia in Arms (1916). Schuler also compiled a unique photographic record of some of the battlefields and the living conditions in the trenches. Later enlisting as a soldier, he served in Flanders where, in April 1917, aged twenty-seven, he was fatally wounded by a stray shell.

The works he bequeathed, the events that spawned them, and the legend that has grown up around them have long overshadowed Schuler's short life. Mark Baker sets out to rescue him, not from the condescension of history, but from the wheels of the mythic juggernaut that he helped put together and propel. It's a noble aim, but the book doesn't quite get there. Mesmerised by the myth- making, and chary of too trenchant a reappraisal of its key components, Baker struggles to sustain his concentration, and his focus on Schuler flickers and fades. In the end, Schuler emerges from the book as more a catalyst than a fully-fledged figure, the vehicle rather than the destination.

Dr Kevin Foster is Head of the School of Languages, Literatures, Cultures and Linguistics at Monash University. He has published widely on war, cultural history and national identity and his work has appeared in a range of national and international journals. His most recent book is Don’t Mention the War: The Australian Defence Force, the Media and the Afghan Conflict (2013). 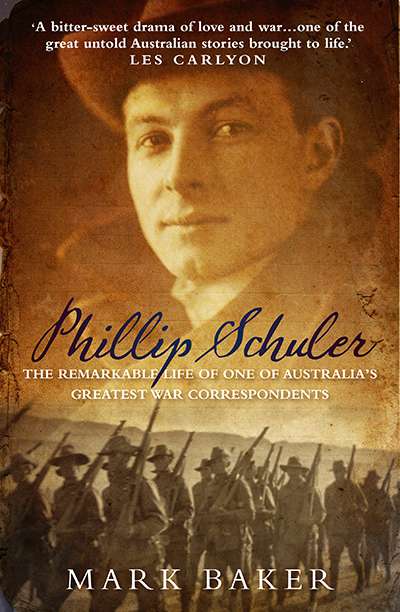 Phillip Schuler: The remarkable life of one of Australia’s greatest war correspondents