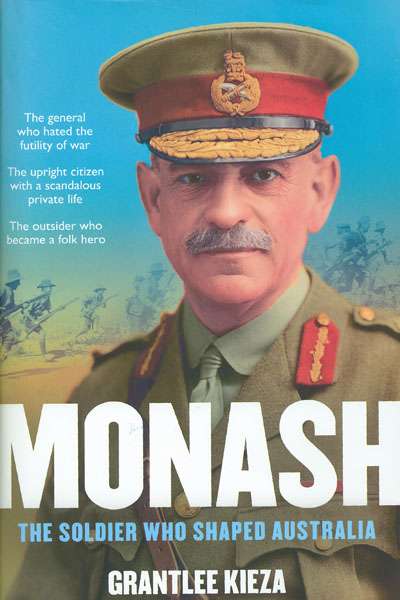 Monash: The Soldier Who Shaped Australia

While A.J.P. Taylor's famous assessment of John Monash was that he was the sole general of creative originality in World War I, the word 'creative' here is misleading. The real measure of Monash's celebrated genius, as Grantlee Kieza frequently points out in this massive tome, was that he learnt, not without mistakes, how to maximise every tool he was given in an integrated way. He was brilliantly innovative at manipulating the modern industrial weapons of war and by taking judicious departures from traditional military norms. He drew on every aspect of his engineering, legal, academic, military, and socio-cultural education and training to shape his wartime strategies, which he then ably communicated to others in the imperial command.

Kieza illustrates this from Monash's immaculate preparation in the Battle of Messines Ridge under the equally innovative Hubert Plummer's command:

Monash constantly studies aerial photographs of the landscape around Messines, and sends out 36 circulars on the planned manoeuvres. The machine-gunners' instructions come in seven parts. Each brigade practises its attack in a training area, and two large models are set up of the battlefield showing in miniature the trenches, wire entanglements, streams, roads and ruins.

Such preparation resulted in a singular triumph for Plummer's clever tactical use of exploding tunnels deep below the German-occupied villages of Messines and Wytschaete on the ridge. Plummer worked closely with the ninth and tenth British Army Corps and Monash's Anzac Corps. Monash and the Anzacs gained their first real recognition from Douglas Haig, the Allies' commander-in-chief, who henceforth had complete confidence in them. Under Monash, they soon became the glory boys of the war.

John Ramsland is Emeritus Professor of History at the University of Newcastle. He now specialises in historical biography and is at present working on the life of non-fiction Australian author Paul Brickhill.

Monash: The Soldier Who Shaped Australia

John Ramsland is Emeritus Professor of History at the University of Newcastle. He now specialises in historical biography and is at present working on the life of non-fiction Australian author Paul Brickhill.