Twenty pages from the end of his New Selected Poems, Geoff Page imagines being ‘an heir of Whitman’, and muses that ‘I think I could turn awhile and write like the Americans, / they are so at ease in their syllables, irregular as eyelids, / various as the sea’. These lines are so cleverly Whitmanesque that the idea seems momentarily plausible. Only an astute reader will stop to think that the sea is hardly various at all – and how irregular are eyelids? Page’s poem, we might realise by this stage of the book, is presenting wry, understated humour, and this is one way in which he seems a deeply Australian poet, utterly unlike the Americans.

In the second part of the poem he admits as much, knowing that ‘somehow after / half a book’ he ‘would … turn back’. Page would ‘feel the need for / tighter turns’ and the poem ends with ‘something / leaner, drier’ and ‘lower-key’ –a summer on the / Clarence maybe …’ These are good descriptions of Page’s voice, and New England’s Clarence River runs through all his poems like the sacred river Alph through Xanadu, a beloved undercurrent even when it is not mentioned.

Page’s lines are characteristically lean, dry, and short; his true American referent is not Whitman but that other big ‘W’, William Carlos Williams. Both Page and Williams write a gentle, reader-friendly poetry which values life’s surfaces – more Thomas Hardy (or Bruce Dawe) than Wordsworth (or Les Murray), and providing depth of thought as it emerges from an unpretentious observer’s meditations on the things of ordinary life.

Page is a great observer, a flâneur of both the city and the country, so it is no surprise that New Selected Poems includes many diverse portraits. These include a nun, an old farmhand, a ninety-year-old woman, a divorcée, a young junkie, a murderer, a minister who has lost his faith, teenage boys learning to dance ‘the foxtrot / Known as life’. The portraits present a sharp selection of details and are intelligent, mature, and judicious, even wise. Nearly all are brief and anonymous, perhaps reflecting the belief in the unknowability of others expressed in the poem ‘Sermon’: even ‘the husband’s or the wife’s’ knowledge ‘is / at best a guess’, and ‘No one knows your true address’. Sermons are scarce in Page’s work, as are moments of existential unknowability; the tone of the poem suggests that even this is to be accepted rather than to provide a source of ongoing angst. The portraits that are not anonymous are those of Page himself, a ‘reader’ and eldest son who left the land and farming life and still feels some guilt about it, and of his parents. Page’s poetry about his mother and father – they are written about separately rather than together – is superb. He is honest enough to present his differences from (and perhaps with) them, but loving enough to try to understand them deeply. This is a struggle in the case of his mother, who has a god of ‘tooth for claw and eye for tooth’. ‘It is not easy, she’d confess / to be my mother’s God’ because she sets a benchmark of stern, foreboding punishment. Despite his protests about human knowability, it says a lot about Page that this poem, ‘My Mother’s God’, is one of gentle protest and in the end a portrait of human frailty; he has no inclination to indulge in her strictures or their ‘harshness’. The book also includes two successive poems, ‘Codicil’ and ‘My Father in his Silver Frame’, that concern his father’s death; they are simply beautiful. In the first the death is impending and the father presents his wish that his ashes be scattered by his son in the Clarence River, after which the son is to pause ‘two minutes more’ and ‘let the upstream view’ delight his eyes. Small wonder that Page wants – no, ‘needs’ – his own ashes to be scattered in the Clarence.

‘The voice throughout his work is one of compassion. He is a poet who cares, about people, places, events, and ideas, whether in private or public poems.’

After the chance of a life on the land, Page’s second ‘long refusal’ is not just of his mother’s god but of any god; he is bothered by metaphysical certainties and those who hold them. Page ‘thinks convictions more impressive / slightly out of reach’. He is a characteristic early twenty-first-century thinker who ‘prefers the right to doubt’, and sees that ‘The world’s too much beset by those / who know what they’re about’. In declaring his ‘agnostic soul’, Page does not deny a spiritual dimension but he can provide a good deal of irony about committed religious belief, for example in the poem ‘Miracles’, which insists on human responsibility.

On non-metaphysical issues Page can be quite certain, and one that figures prominently in his work is the treatment of Aboriginal people. His has been the strongest white voice in poetry on this core Australian subject since Judith Wright, and it is no accident that both grew up on the land. One thing Page brings to the issue is an awareness of the role of language in the long history of white injustice. ‘The Squatter’s Thesaurus’ ranges from colloquial euphemisms (‘dressing down’) to official (‘Vigorous remedies’) before concluding ‘The future talks of settlement … / and murder is a language learnt’.

On such issues the danger for a poet is sermonising or predictability; Page never falls into either trap, partly because of his technical skill, in free verse or in rhyming quatrains, and partly because of his command of tone. The voice throughout his work is one of compassion. He is a poet who cares, about people, places, events, and ideas, whether in private or public poems. This is apparent even in the admirable clarity of his poetry and is perhaps driven by his awareness of time taking everything ‘down / politely and forever’. Many of the poems have an autumnal feeling and a poignant sense of how things, and we, slip away ‘into air’, and of how this is ingrained in our existence from the beginning. It is enough to make Page create so many gentle ‘Smalltown Memorials’ with skill and humility. 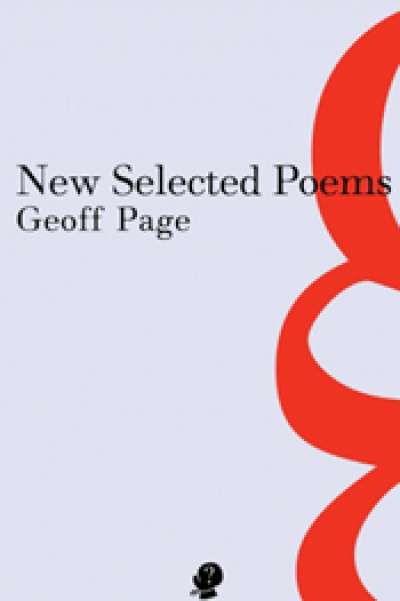