Making News is Tony Wilson’s second novel for adults. It is a romp over the fertile ground of tabloid media, celebrity sports stars and family crisis. Lucas Dekker is the bookish teenage son of Charlie Dekker, a high-profile Australian soccer star who has just retired from the English Premier League. Lucas’s mother, Monica, has graduated from footballer’s wife to bestselling self-help writer, comfortably eclipsing her husband’s earning power in the process. When Lucas wins a young writer’s prize to become a columnist for tabloid daily The Globe, it seems as though he might follow in his mother’s literary footsteps.

But this family is unhappy in its own way. When Charlie is caught in a sleazy sex scandal with two call girls, it emerges that the incriminating footage was the work of a tabloid sting, by the very same tabloid that Lucas is now writing for. The set-up allows Wilson plenty of scope to wallow in the bathos of the British press. He enjoys himself immensely at the expense of football, celebrity and media figures, from Frank Lampard to Cory Hart.

We are in familiar stylistic territory here, somewhere between Hanif Kureishi’s Buddha of Suburbia (1990) and Steve Toltz’s recent A Fraction of the Whole (2008). However, while Wilson’s plot is bold and energetic, his prose lacks the sparkle or polish of Toltz’s book. Lucas is a sympathetic character, but his parents are two-dimensional, and it becomes in-creasingly difficult to stay engaged with the Dekker family as the book winds its way towards its climax. It may be unfair to compare Making News to a book as different as David Mitchell’s Black Swan Green (2006), but Mitchell’s beautifully drawn coming-of-age study shows the depth that can be rendered by a more patient and deliberate novelist.

Even so, I thoroughly enjoyed Making News. Like many a successful footballer, Wilson makes up for a lack of superlative talent with energy, commitment and brio. He can also be very funny. 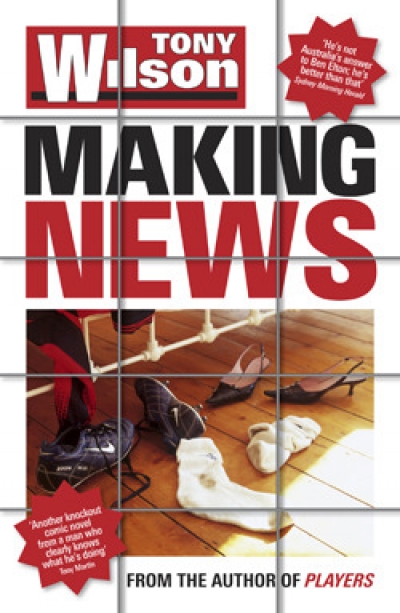