Detritus: Addressing Culture and the Arts by Robyn Archer

A sarcastic little slogan on a wall in Australia’s arts funding organisation in the mid-1990s read ‘Il y a trop d’art’. All right, it was meant in jest, but it seemed to hint broadly at shared bureaucratic resentment of importunate artists, even though they were the Council’s clients and the reason, indeed, for its very existence. Remember the national health hospital in Yes Minister that ran perfectly until it had to take patients?

Nothing is new about this. Whether under the Ming, the Medici, or the Australia Council, art has always been more plentiful than patronage. Artists, like the poor, are always with us, and many Australians opt for Lang Hancock’s solution: to help the poor by not joining them. Usually, those who teach arts practice, administer arts funding or market the arts have more to live on than do creative artists themselves. A few creative people, thanks to their luck or skill in playing the roulette of official subsidy, private benefaction, commercial success or critical recognition, do manage to achieve wealth and fame. But then, as one of them, David Williamson, has remarked, their fellow artists treat them like traitors. Because creative people are prepared to live on very little in pursuit of their passion, they unintentionally drive down the pay, conditions and even expectations of artists themselves, to the point where many give up the struggle, and end up getting ‘a real job’ instead.

This may be Australia’s way of separating a few grams of artistic wheat from truckloads of chaff, but it gives no comfort to Robyn Archer. A lifetime in the arts (she started performing at age four in her grandparents’ Adelaide pub, overcame asthma and did ‘pure entertainment’ until she was twenty-six) has made her a passionate arts advocate and one of Australia’s few perennially successful artists. With an AO, she belongs to an even smaller élite of Australian artists who have made the honours list. A singer, actor, director, event organiser, entrepreneur, and perpetual nomad, she can also write fluently, frankly and with erudition, even on planes. This collection of her public speeches from 2003 to 2009 is her sixth publication, and as a proto-autobiography, it’s good to have them on the public record.

The ‘detritus’ of Archer’s title signifies what’s left over after the creative act: art that is sold, printed, performed, hung or otherwise stabilised. She disparages the crowds of people who queue in the Louvre to see a priceless ‘cased-up electronically protected painting of a smiling woman’. She scorns Western culture for failing to value Vincent van Gogh while he was alive and for inflating the price of his artistic detritus instead. She is down on opera, as well as on Elgar, especially his Enigma Variations, which bring out the republican in her. Her scorn of Baz Luhrmann’s Australia for using ‘Nimrod’ rather than any work by an Australian composer, is monumental. In contrast, she cites ancient cave painters, and graffiti artists such as Banksy, whose work is ephemeral, ‘in the doing and the moment’.

For Archer, the value of art is in the momentary act of doing it (the process), not the price that is paid for the detritus (the product). She wants to persuade consumers and funders of the arts to focus more on the creative process, and less on the end result. She appeals for acknowledgment of an artist’s long career as the context through which ‘moments of creativity’ are scattered. She bristles at the mechanistic implications of Blairite ‘creative industries’. An endangered parrot raises a louder outcry, she complains, than another language lost or yet another poet or composer silenced.

Archer knows what arts advocates are up against. She has read Manning Clark’s account of an Australia where power belonged not to visionaries nor women, but to ‘ruthless and tough men’, for whom material success meant happiness and material achievement represented public virtue. Even if that Australia is no more, its mindset can still be invoked on demand, as when Colin Thiele and Steve Irwin died within days of each other. The Australian media barely mentioned Thiele, but John Howard called Irwin a great Australian, and in Los Angeles he was hailed as ‘the face of Australia’. In the media, the arts are now a mere ‘fringe on the frock of life’. Only when we have a leader who cares about culture, says Archer, do the arts get a look-in. At the 2020 Ideas Summit in 2008, she believed that in Kevin Rudd the arts had a champion. How times have changed.

In these speeches, Archer rehearses the well-known arguments for the arts, calling them ‘essential food for the soul’ of Australian society. But ‘who should pay for culture?’ is always the question. Archer doesn’t bother with private or corporate philanthropy: she wants government to support the creative process of artists, ‘all of them’, and for their lifetime. Moreover, funding should go to untried work that hasn’t yet found a paying audience: ‘Those who dare the newest weirdest stuff should be supported and encouraged every bit as much as those whose work immediately resonates and becomes popular and therefore potentially profitable.’ But since government funding of all artists for life is hardly possible, how to choose? Who should decide? What criteria should apply to untried work? Here, Archer is short on answers, apart from proposing an Australian national lottery that should give half its proceeds to sport and half to the arts.

Archer’s enjoyment of regional events such as Mildura Arts Festival, her Indigenous artist friends, and her plans for future festivals is contagious. She has interesting insights on cultural policy in European countries and the United States, although her observations on India, China and Japan are less confidently informed. Like most public speakers, she has her favourite lines, which went over well at the podium, but get repetitive in a published sequence. She habitually refers to herself as a gypsy, for example, often disparages ‘bums on seats’, repeatedly advocates ‘flexing the creative muscle’, and reminisces several times about Deakin, Chaffey, and the postwar irrigation scheme. But in today’s Australia, where the best lack all conviction and the arts aren’t even discussed, her ideas deserve all the repetition they can get. 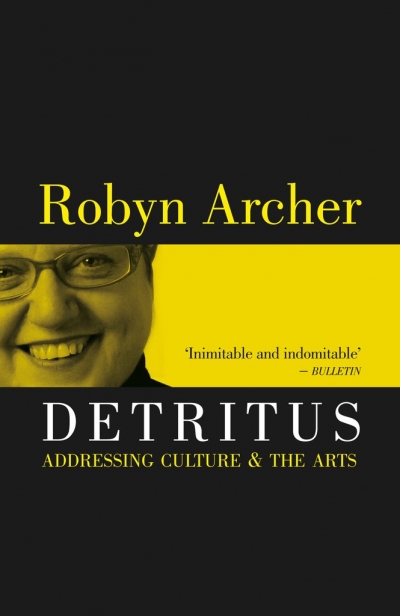 Detritus: Addressing Culture and the Arts