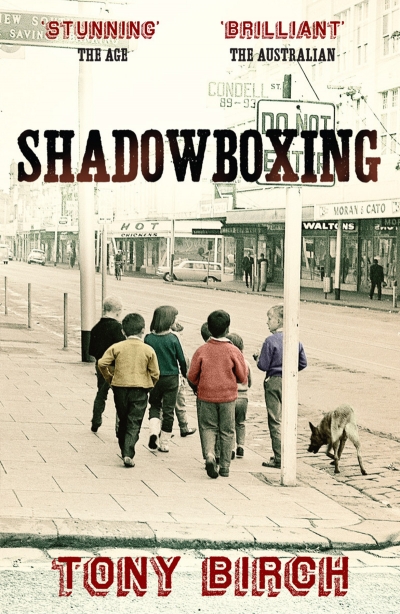 Shadowboxing is a collection of discrete short stories charting the arduous journey of the narrator, Michael Byrne, from childhood to fatherhood. Living in the inner-Melbourne suburbs of Carlton, Richmond, and Fitzroy in the 1960s was for many a tough proposition – and the Byrne family is no exception. Their household is headed by an embittered alcoholic whose violent tendencies are a source of constant dread. Money is always tight, and the family’s grip on any sort of security or comfort is invariably tenuous. Yet when the stories have been told, what we are left with is not a litany of woe but rather powerful examples of resilience and resourcefulness provided by the inhabitants of these impoverished communities.

The title is a fitting one, referring not only to the environment in which young Michael was raised, but also to the consequences of pursuing answers as an adult amongst the tangle of childhood memories. In ‘The Lesson’, Michael’s father provides the eight-year-old with a bloody initiation into the ways of the ring. But the ring is no match for the aggression that dwells in these parts. Violence flourishes in the local streets and homes. And it casts a long shadow.

The strength of these stories is attributable to the skilful blending of the child-narrator’s vulnerability and innocence with the adult-narrator’s sense of compassion. This affects not only the later stories where Michael cares for his derelict father but also the manner in which the earlier stories are presented. These are stories whose universal themes are brought to the fore by lucid prose that, in bearing unblinking witness to hardship, sows the seeds of poetry, if not grace.

Steve Gome is a freelance actor and writer.

Steve Gome is a freelance actor and writer.