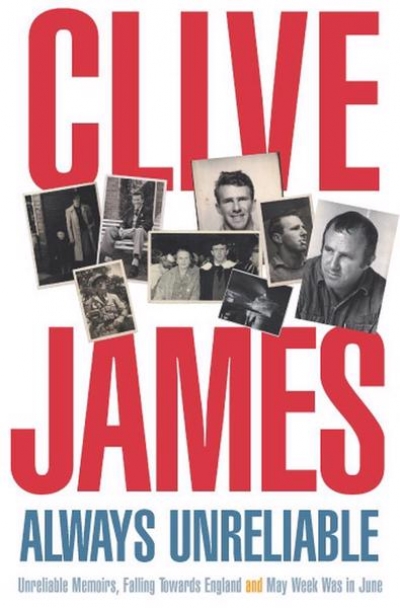 Clive James is a fussy A-grade mechanic of the English language, always on the lookout for grammatical misfires or sloppiness of phrasing that escape detection on publishing production lines. Us/we crashtest dummies of the written word, who drive by computer, with squiggly red and green underlinings on the screen to help us steer, should therefore expect perfection in James’s own work, and pounce with Schadenfreudian glee if disappointed. Having just finished reading his autobiographical trilogy, Always Unreliable (previously published as individual volumes between 1980 and 1991, but here crammed into the one plump tome), I can report that, apart from a couple of typos (though, if you ask me, ‘slipped’ is a more evocative word with three Ps) and one or two lazy descriptions, such as dubbing rugby league legend Reg Gasnier’s sidestep ‘a kind of poetry’, James’s prose barely has a scratch on it.

Looking under the bonnet, we find an Australian suburban childhood, a 1950s model that thousands have owned and swear by to this day. James has kept his memory of it in pristine condition. He might label the trilogy ‘unreliable’, but I don’t believe him for a minute. My late Aunty Dorothy, a goer in her youth, by all accounts, always referred to the fifties as the ‘filthies’, but would never tell me why. James isn’t so coy. Certainly, he provides his readers with cute, wholesome stories about antics in the bushes, backyards and streets – billycart races, snake confrontations, swimming, sunburn and lollies – simple elements that, if left in their crude form, would amount to sentimentality and little more. But that doesn’t happen with James’s memoir because it contains intricate psychological wiring. He is a sad, clever funny-man, an observant loner, a dreamy only child whose father died too soon, someone who suspects in early boyhood that there may be shortcomings in his nature and worries himself into a state of feyness about it. His sexual openness – there was a lot of masturbation out Kogarah way in the fifties, and bisexual crushes, and (Aunty Dorothy cover your angel eyes) participation in an adolescent group sex romp with the blankly willing town bike Laurel – also helps refine mere childish reminiscence and its generic backdrop into a tougher, nononsense, personal production.