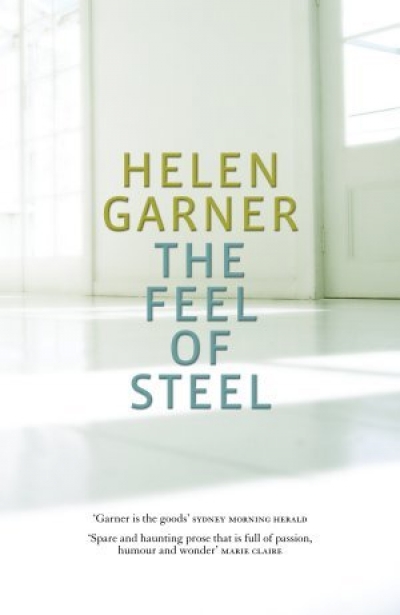 Following True Stories, published in 1996, The Feel of Steel is Helen Garner’s second collection of non-fiction. It comprises thirty-one pieces of varying lengths. Longer narratives such as ‘Regions of Thick-Ribbed Ice’, about a hair-raising trip to Antarctica, and ‘A Spy in the House of Excrement’, about the outcome of a cleanse-and-fast régime at a spa resort in Thailand, stand beside delicate haiku-like sketches with a faint stitch of narrative, such as ‘Baby Coughs’ and ‘Who Spilt the Wine?’ Large and small beads, they are strung onto strong autobiographical thread.

Unlike much of Garner’s earlier work, this latest collection does not make strong appeals to readers’ moral sensibilities. And, unlike the stories in True Stories, which are easily singled out or read randomly, the non-fiction-that-feels-like fiction of The Feel of Steel gains from being understood as it is arranged in the book, each piece answering to the others around it. It’s a question of relationship.

Relationships are central: siblings, friends, mothers and fathers and daughters, aunties and nephews, ex-partners, teams, congregations, captains and passengers, teachers and pupils, and, not least, the single person’s relationship to herself. For Garner, solitariness is not a new topic. But this time it’s different. Packing sadness, sarcasm, and true wonder into one punch (or to use a Garnerism, a ‘wallop’), she asks: ‘Isn’t a couple the greatest mystery of all?’

The art of the dumb question is the art of suggestion. Garner’s prose runs with deceptive ease. The content is often minimal and within easy grasp. The tone is intimately informative. But the reader quickly comes to recognise that there is a vastly bigger picture here, a humanised join-the-dots landscape planted with signification. Sexuality, aesthetics, spirituality, and love are only slightly hidden in, say, a pair of gumboots (as opposed to a pair of towering heels), a packet of Textas (missing the blue), stones (Garner’s controversial ‘first stone’ and those cast since), clean sheets, a weather map, a duel. At one point, Garner notes: ‘everything around me is seething with meaning, if I can only work out what it is’.

In True Stories, Garner quoted Joan Didion’s view that writers are ‘lonely, anxious rearrangers of things’. Garner arranges her clusters and networks of intimacy – people to people, people to objects, people to places – by subjecting them to emotional extremes. Around chunks of reportage, there’s a wash of pathos, hyperbole, and humour. A wedding ring threatens to slip off fingers that have shrunk with cold. Reading the poetry of Alexander Pope, the author ‘nearly died of admiration’. She feels guilty that she does not like penguins, and intense guilt at forgetting most of what she reads.

Garner has always been a bit of a joker. As much as she likes to laugh at or with others – her work is lit with lots of gleeful falling about and stumbling along – she also knows well how to take a tilt at herself. The description of collapsing from exhaustion when she visits an art gallery is funny. The analysis of self, others, and poo in ‘A Spy in the House of Excrement’ is very funny. Perhaps the funniest, because of its poetic scope and spontaneity, is her account of showing her mother, who suffered from Alzheimer’s, a photograph of her new great-granddaughter: the mother holds the photo by one corner (Garner’s gift for detail) and asks, ‘Do I just look at it … or do I have to make a decision?’

The humour is not without sting. It hovers somewhere between feeling and steeling, the flesh and the carapace, amour and armour. Readers might well imagine that The Feel of Steel is a book of battles, because the title refers to the author’s rekindled interest in fencing. ‘The language of fencing is old French, beautiful and severe. Ernie [the coach] used the phrase le sentiment de fer. The feel of steel. That’s what I want,’ Garner says with a touch of petulance. ‘I want to learn to fight, but not in the ordinary wretched way of the worst of my personal life – desperate, ragged, emotional. I want to learn an ancient discipline, with formal control and purpose. Will my body hold out? I hope it’s not too late.’

In ‘Regions of Thick-Ribbed Ice’, she battles both the savage elements and her own gloom. She recounts reaching the crest of a hill and ‘having to crouch and claw at the ground so as not to be blown off my feet’. She describes how ‘the wind whips fine grit off the stones and slashes it into our streaming eyes’, and how she keeps ‘stumping along in my brand-new gumboots, leaning forward and stabbing my toes in among the stones, the only way to make progress against the cold wall of wind’.

Even if by surrogacy it is only wine that is spilt and not blood, the book abounds with combative energy and imagery. Blokes bash one another with baseball bats. People thrash each other at Scrabble. Bones and hearts are broken. Some fight illness and death. Others struggle to read, and to read the Bible. A person says he would crawl over broken glass to take communion. A mother who was once ‘the most law-abiding person in the world’ becomes a ‘raging virago’. Friends squabble. On a football field, young boys drop, stagger up, slog on. In the aftermath, woven into the excess of battle, there are wounds and torrents of tears. At one of the lowest points of her life, Garner moves into counterpoint, choosing ‘the highest, airiest place I have ever lived in’. But the therapy is slow to work. ‘Disappointment in my famous view … Sometimes, through the windows smeared by salt from the sea wind, it even looks … ugly … It’s a drain on me – one more thing at which I fail.’

Garner once confessed to having been addicted to emotional upheaval. ‘I circle around the dark area of life (mine or someone else’s) … and search for a way in,’ she wrote in True Stories. Now, in her darkest moods, she seems beset by sadness as by a kind of curse. At the heart of this grief is the breakdown of her third marriage. ‘What if somebody’s heart has been broken one time too many?’ she asks, casting the question by way of the reader, back into her own domain.

She garners her sorrow. The paradox of an abundance of loss and a loss of abundance is worked to the bone. The skirmishes and founderings that fleck this author’s lens (and one of several self-reflective parodies of romantic disappointment is aptly titled ‘My Blue Glasses’) become so numerous that, like Garner herself, echoing Kafka’s ‘longing for something greater than all that is fearful’, the reader yearns for relief.

The reader figures, that at some point, the author must have cleaned those depressing salt-smeared windows. Connoisseurs of her work might imagine this to have been performed with the exact same fierceness of spirit as the heroine’s in the closing scene of Garner’s novel The Children’s Bach (1984), cleaning her house.

Then the sadness shifts. The author notes:

The cotton pin of my sewing machine snapped off last night, as I was about to sit down and start sewing my curtains. Normally, these days, I would have collapsed in tears, but I just looked at it with a cross, disappointed feeling, and found something else to do with my evening …

And off she goes to a cocktail party. PHEW. The hilltop apartment loses its doleful and dismembered prison-in-exile connotations and takes on a distinct brightness and blessedness, a place ‘past whose windows birds flew and called in the sunny emptiness on its eastern side’, a launching place for new beginnings in familiar (and familial) places. Garner, with no small degree of ironic effort and triumph, packs her belongings, leaves Sydney, drives south, and crosses the Murray into Victoria.

The single mother we met riding with her child on a bicycle through the streets of Melbourne in True Stories has become a single-again grandmother driving round in her ‘nanna-mobile’, head-over-heels in love with her grandchild. It’s a head-over-heels kind of story, where the stab-stab-stab of the ice, the pen, the needle, the sword produces (to borrow from ‘Arrayed for the Bridal’) an unclenching of fists, a breathing out of hysteria, and sheer beauty. I can only suggest that it has something to do with the author’s mastery of her craft.