True History of the Kelly Gang by Peter Carey

You can’t escape the black square with the ominous slit: it’s about as familiar and inevitable in Australia as the icon for male or female. Ned’s iron mask now directs you to the National Library’s website of Australian images. There it is, black on red ochre, an importunate camera, staring back as we look through it. It’s modernist, postmodernist, merged into desert art just as surely as Ned has been incorporated into the Dreaming of the Yarralin people of north-western Australia. The black imp of myth and Sidney Nolan’s depiction is now wild and out of control – as unpredictable as a Mimi spirit and about as omnipresent.

I don’t believe Peter Carey set out to tame the mythic Ned Kelly in his True History of the Kelly Gang. True, he gives him back a face, real feet that need real boots, a memorable voice and a familial context. Carey is an unabashed apologist – a romantic apologist what’s more – for Kelly and his clan, but he is also too much the ironist not to be alive to the density and contradictions of the historical record. He seems almost as interested in why Ned Kelly matters to Australia, what he says about what we have been and what we want to believe about ourselves, as he is in revising or revisiting the old story. Or at least that’s the subterranean pulse. The wherefore. But novelists transmute wherefores into story, and Peter Carey, whatever else you might say about him, is a master at telling a tale, and a slave to the imperative. Give him mouldy underfelt and he’ll have you flying to Samarkand.

The tale he tells in True History of the Kelly Gang has a dramatic logic and a necessary economy of means. Carey shapes the story, neatens many (not all) of the ragged edges of the conflicted Kelly history. He explains rather more perhaps than can be explained, even by the now immense historical archive. Carey’s Ned is a boy too attached to his mother. ‘Hubba hubba Mamma is your girl’ is his brother Dan’s drunken taunt. The Oedipal bond is a deft narrative device – it explains some of Ned’s moves. With his mother still imprisoned, Carey’s Ned knows his duty – to get money (the bank robberies), see his mother free, and assume responsibility for the family – to stick around rather than lighting out for the territory. 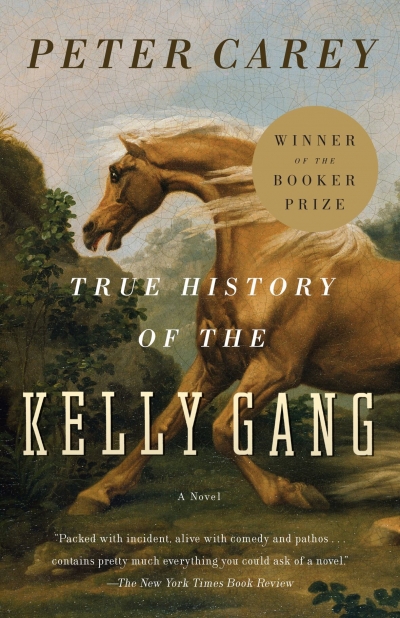